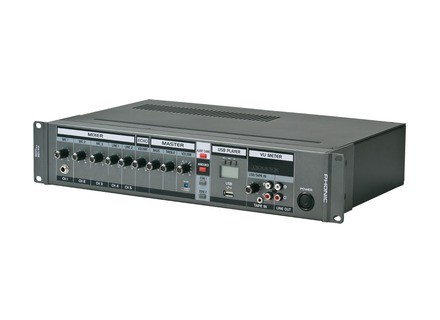 Phonic will be releasing a brand new dual zone mixer/amplifier with USB playback – the ZA100.

Phonic’s zone-assignment talkback switches allow users to route the incoming talkback microphones to any of the available zones. The new Phonic ZP10, ZP15, ZP20, ZP25 are horizontal and vertical zone selectors for the talkback microphones of the ZX2 and ZX4, offering simple 2- and 4-zone application in ‘light switch-esque’ constructions. The ZP30 and ZP40 offer both talkback zone allocation and remote level adjustment for the ZX2 and ZX4 respectively. The ZX2 and ZX4 are Phonic’s 2- and 4-zone mixers, offering multi-zone mixing for installations in supermarkets, shopping malls, airports, clubs, and other setups that require multi-zone operation.

The ZA100s are 3-input, rack-mountable mixer/amplifiers that provide operation to all manners of permanent installations. The unit offers 100 Watts of power to two separate zones through screw-terminal outputs into 100V, in addition to a single 4 ohm output. Phonic has also incorporated its USB playback technology into the ZA100 mixer/amplifier. Using the USB player, users can connect a USB memory stick with MP3 or WAV files to incorporate the audio to the mixer. The mixers themselves are rack-mountable and take up two standard rack spaces.

Visit www.phonic.com for details as they emerge.