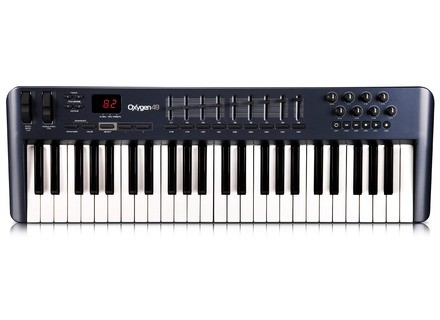 View other reviews for this product:
The 2009 version of the M-Audio Oxygen 49 is the newest version of this popular MIDI Controller. It comes in black as opposed to the original models which are gray. It's got a 1/4" output in the back for a sustain pedal as well as a USB port for hooking it up to your computer, which will also power it up. It's very simple, but it gets the job done and then some.

The feel of the M-Audio Oxygen 8 2009 isn't great, but it's still enough to lay down parts and play it easily enough, just don't expect it to feel like a real piano or anything since the keys aren't weighted. Obviously, the keyboard has 49 keys, but it also features nine sliders and eight programmable knobs for assigning parameters, as well as transport buttons, a pitch and modulation wheel, and track and transpose buttons. It's all pretty simple to use even if you're new to the world of MIDI controllers.

The 2009 version of the M-Audio Oxygen 49 is the perfect choice for anyone looking for a budget conscious MIDI controller for any purpose. While I do not own one of these myself, my room mate does and I've used it a bunch in his home studio here. I also used to have the original Oxygen 49, so I've got something to compare it to. I definitely think this version is a big upgrade as you've not only got more parameters and options to work with, but also a sleeker looking design. The price is really the best thing about the 2009 M-Audio Oxygen 49 as it won't cost you much at all to get a full fledged MIDI studio here. This is great for any DAW owner, even if you're not using MIDI all the time, as having the capability this day and age is a must. If you want a MIDI controller but don't want to spend too much, the Oxygen 49 is the way to go.
Did you find this review helpful?yesno
Cookies help us improve performance, enhance user experience and deliver our services. By using our services, you agree to our use of cookies. Find out more.