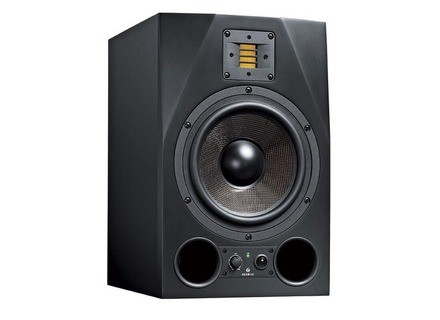 A8X, Active Monitor from ADAM in the AX series.

Buy this productView price information >
View other reviews for this product:
After working on Yamaha HS80M which for me are inaccurate in the low end and low mid, I turned to Adam and A8X A8x why not A7x or A77X? because according to my area which is governed 25m2 I needed midfields monitorings which can descend to at least 38Hz and fill the sound space of my room and have a good performance. My usage is facing a work studio recording and mixing and mastering. I mix all of it.

The great debate of the neutral curves or not! Be aware that all manufacturers will sell so-called neutral pregnant, yes anechoic chamber or in an acoustically treated room. My board is processed and despite its the first commissioning of adams A8x I had an excess of serious like tissues present on the tweeters. First steps to address this problem is to put a cd that you know very well frequentially speaking. Then adjust your speakers, then yes some will say it's sad to feel the response curve for monitoring sound called "neutral." But I reply that no monitoring is a neutral choice of monitoring is related to the couple "+ room monitoring" or as you SIXTI the curve of your speakers will change so you will have to edit it. So to return the setting after finding the right setting so here I stayed on the "buttocks" beautiful sound is balanced. After mixed on Adam A8x I can move on any system and I find everything I have heard on my Adam A8x. After A7x are great too can be a serious recurrence artificial around 42 hz remains my great for smaller rooms and the A77X for me have nothing to envy to A8x if not be larger speakers midfields.

I use them for 1year.
Goodies: beautiful acute not aggressive, a good dynamic, beautiful balance once settled.
Cons: A slight depression around the media, but nothing crazy
The value for money is very good I think to start work very bine sound you have to put in at least one thousandth of Monitoring.
I remake that choice without a doubt.
See the source
Did you find this review helpful?yesno
Cookies help us improve performance, enhance user experience and deliver our services. By using our services, you agree to our use of cookies. Find out more.