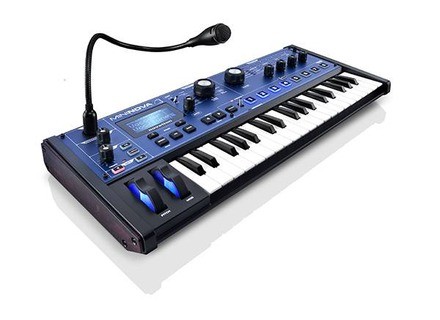 MiniNova, Analog Modeling Synth from Novation in the Nova series.

Buy this productView price information >
View other reviews for this product:
The Novation MiniNova is a synthesizer that is very small and compact but packs some great sounds. It has some of the same features as the regular model UltraNova. The MiniNova has 256 sounds on it, you can tweak and transform each one of those sounds very easily with the knobs on the front of the MiniNova. The MiniNova does not have speakers on it though so you will need to have some sort of an interface to plug it into. Or you can purchase some sort of monitor just to send the audio signal through. Especially if you are live musicians and use the MiniNova, you will want to have a good monitor to play it with.

One thing you will notice with the MiniNova is you can get some great sounds very easy. You can just tweak a few knobs after loading a preset and get some good stuff. There is no programming involved and no need to read the manual or watch any tutorials. Just load a sound and start turning knobs. I have found some really good sounds that I use in my electronic music just by messing around with knobs on the MiniNova.

The MiniNova also has a voice-tune effect and vocoder on it. I do not use the vocoder that much but it does come in handy sometimes. The MiniNova is well built, all of the material it is made out of seems to be strong. I can tell the MiniNova will last a long time for me as long as I don’t drop it or knock it off the stand.

Using the MiniNova is like a breath of fresh air. I have not had many synthesizers that give me such good sounds with little to no effort at all. I think anyone who makes electronic music or even dub or bass music needs to get this synthesizer now.
Did you find this review helpful?yesno