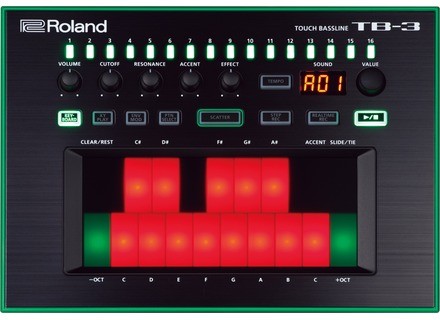 TB-3, Analog Modeling Synth from Roland in the AIRA series.

Another AIRA component announced by Roland is the TB-3, which emulates the vaunted TB-303 bass synth.

Like the other components in the AIRA series, the TB-3 uses Roland’s new Analog Circuit Behavior (ACB) modeling technology, to recreate the sounds of the the TB-303, and Roland has also duplicated the functionality of that instrument, with a lot of digital-era touches such as the Scatter feature, which allows for slicing, reverse, gating, and more, making possible the easy creation of stutter and glitch effects.

The TB-3 is expected to ship in March of this year. Definitive pricing hasn't been announced, but early indications are that it will have a street price of around $299. For more information, visit RolandUS.com.