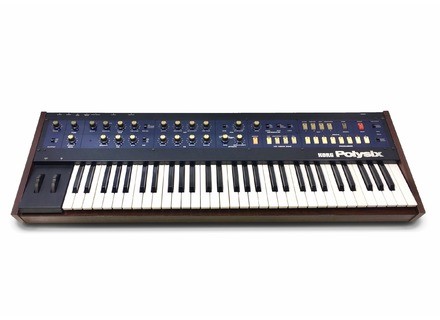 View other reviews for this product:
Dcrire not need a keyboard in dtail trs known ... I would simply say that he has a pretty face in a set-up. Too bad it does possde a mono output and no portamento or glide. Otherwise, it's almost a faultless for me for a small analog synth of a range of low price trs.

It really is super simple to use. There are plenty of large well-spaced knobs, and clear. The main strength of this synth. Live, nothing more enjoyable to modify a sound, whether the LFO, filter, modulation ... to prompt the user.

It's funny that many people compare it with the Roland Juno 60. Yet it's not really the same ... even not at all. Ok, the two possdent osciliateur by a voice (with a sub), 6 voice polyphony, one envelope of memory used, no portamento, effects included, 5 octaves, a arp giateur and quoted at about the same price of the 80 beginners.

But in her is something else. Roland had already installed the COD in the SERIES Juno, the quip has a high pass filter, envelopes relatively fast, more memory, etc ... while The Polysix is ​​equipped with a VCO and a sub, a low pass filter 24 dB / oct, envelopes, slower, and only 32 memory users.

Roland sounds irrmdiablement 80's, trs clean, well-off (thank you chorus reconnat stro ...), it immediately hits the sounds of the 80s. In short, a Roland sounds. The Korg is much mchant noise level. The version I have is not perfectly calibrated, and the six VCO's have a very small trend drifter, giving a natural chorus that sounded even more fat! In addition, the SSM 2056 filter is not at all in the same mold as Roland. Sounds much more "moogish" than its counterparts Roland synths or quips Curtis. In short, the sound of the Polysix is ​​amricain, dark, hot, 70's the 80's the Japanese.

The specialties of the Polysix: tablecloths, thanks a PWM strong enough, including the two LFO (MG) or the dial knob, but also thanks to built-in effects, Chorus, Phaser and Ensemble. Tablecloths, soft rev of a filter with almost closed strings to the super wide and clear. Of copper brass trs thanks the magic of the filter ... The SSM leads are not ugly either, although it lacks a portamento. We arrive a little work around the problem with the pitch-bend, but it's not the same thing. Fantmatiques blips and sound effects are also the strength of this synth.
And last but not least, low ... Many say that Juno is much better. Personally, with good rglages the filter, the PWM and the sub-oscilio the unison mode switched and envelopes at a minimum, I leave absolutely monstrous bass that do not much envy the Junos ... may be just a little "fat" and aggressive.

Short for the price, and despite the limitations we get a sacr dj sonic palette.

I have long had a Korg Trident, I really aim. Unfortunately n'tait not in the best state. Cosmtique as much technique ... And I sold. T pass and I found one for 170 Euros Polysix. Super state, battery change, capacitors changs. There's just one of the sides which some scratches. Suprieur panel is still like new!

For me, apart from only six votes (instead of 8 for the Trident), the two VCO's per voice and the two envelopes, I find the possibilities almost equivalents! With the effects and more, a simple but so effective arpgiateur and useful that guarantees hours of fun and a much infrieur weight (about half).

In my humble opinion just a synth msestim today. Trs but endearing.

If you find one, THE FIRST thing to do is open and the state checker. If it is good, take. And change the battery. So you'll still have a synth for years that will make you good services. If it is bad state, go your way. And expect in a better state.
See the source
Did you find this review helpful?yesno
Cookies help us improve performance, enhance user experience and deliver our services. By using our services, you agree to our use of cookies. Find out more.