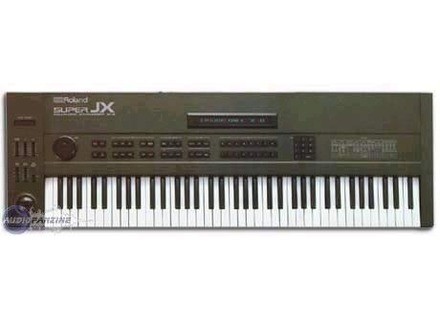 View other reviews for this product:
Keyboard 76 keys with aftertouch and VLOC
is the equivalent of two JX8P runis in a synth. The polyphony is double (16 instead of 8), and especially you can play two sounds DIFFERENT both with DIFFERENT paramtres to move from its other
In addition it is a good master keyboard trs. In particular there are two sliders that send control CC (5 and 7 respectively for the volume and aftertouch I think), which allows to control at least two paramtres a synth on a PC

.
It all feels solid and exudes synth pro. But I put that 8 because it apparently can not edit midi custom settings from a PC (but I do not care

With the PG-800 and the manual, it could not be more simple. Without the PG-800, I know if it's very practical use, but it is certainly better with

For sounds see the notice on the Previous JX8P!
The sounds are pretty anne 80 although it is a pure analog, probably due to the DCO who are not "heat" authentic VCO. on the other hand, all analog synths that ever existed, it is certainly the richest sound level: thanks principle of two synths in one, it can make sounds that are difficult to believe possible subtractive synthse! Including pianos, of course it's not "raliste" but I do not think we can do better with another analog ... In short, the possibilities are standards, there is no limit of its large electro-vintage. Otherwise it is true that the basic sounds are quite "new age", such as tablecloths, but it does that the user to CRER sound banks more current!

Here I just wanted to perform all necessary the opinion which has just been on the post JX8P. Trs INTERESTED but the person who described seem to know what a sampler and a sample
c an analog so all sounds are gnrs by addition and subtraction of basic waveforms (sine, square triangle ...) gnres by oscillators (in the case of JX8P, the DCO Digital Controlled Oscillator, VCO to oppose the Voltage Controlled Oscillator found in even older synths)
So no pr-recorded sounds, no samples in the JX8P and others (jx3p, JX10), only one of its custom settings are saved in banks (waveform, DIFFERENT paramtrs value as cut-off, ADSR envelope, etc ...)
See the source
Did you find this review helpful?yesno