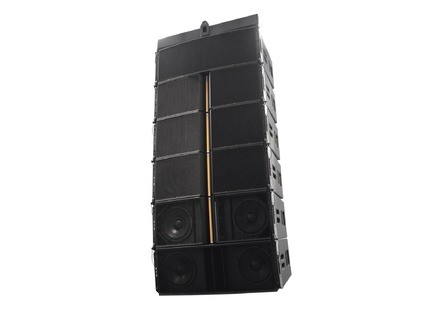 The new LR series flagship is a line source that can be vertically arrayed to reinforce sounds in large venues, arenas and more. The LR24 uses the Alcons Audio Pro-Ribbon technology for the high and medium frequencies and its patented RBN1402rsr tweeter, with its 14” voice coil and its isophasic cylindrical waveguide, can handle a power of 3000W peak.

The LR24 also hosts two 12” neodym woofers with carbon-reinforced cones and 4” voice coils in a bass reflex port with dual-spider suspensions, as well as four 6.5” neodymium mid speakers in a symmetrical setup.

The LR24 is designed to be exclusively amplified by 4 channels of the Sentinel amp/processor, HF and MF section pre-wiring, called SignalIntegritySensing, is specifically designed to ensure cable length and impedance compensation between the loudspeaker and the Sentinel.

The frequency response announced by Alcons for this model is 51Hz - 20kHz (-3dB) and the horizontal projection angle is 80°. The low frequencies can be reinforced with the LB24 subwoofer and its dual 12” woofers.