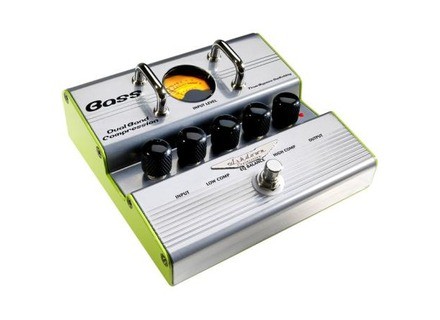 The simplest setting is to not press the switch, that's where we had the best sound.
otherwise look for a compression without saturation does not eat low or no dynamics .. I tried after 20 minutes I got tired.

Tried on a Cort A4 (also) and a Hartke HA3500 head, although it really is not my favorite amp, the sound was much more defined, Péchu and had more sustain .... NO effect.

then I can not put even a built-in compressor to the head did a better job.

I just wanted to confirm previous opinions, I said that I tried the pedal in-store (20 minutes). I had a digitech that costs less and although digital is a much better compressor than the latter (which is more expensive).
I could also use the limiter / enhancer that is worth the digitech boss (without having the same sound but that's another story) and so is a hundred times better than this.
I have nothing against Ashdown in particular I wanted to try this pedal because I owned a combo of the brand that worked quite well .. Always try before you buy (or not)!
See the source
Did you find this review helpful?yesno
Cookies help us improve performance, enhance user experience and deliver our services. By using our services, you agree to our use of cookies. Find out more.