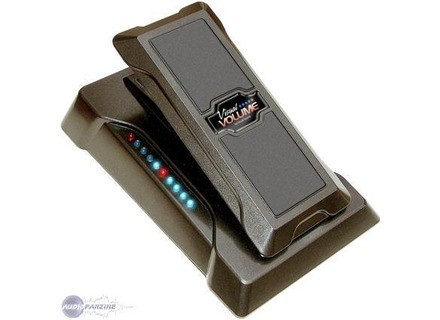 Visual Volume, Volume Pedal for Guitar/Bass from Truetone in the V2 series.

View other reviews for this product:
* Die-cast aluminum housing
* Blue and red LEDs
* Active and Passive modes
* Clean boost pre-amp in active mode
* Two inputs and outputs for mono or stereo use
* Tuner Out jack for silent tuning


This is probably the most exciting thing that's ever happened to volume pedals for generations now. Volume pedals have generally just been nothing but a pedal, a pot and some strings. But now visual sound has literally reinvented the volume pedal making it not only suited better for live use but also added extra stuff to make it even more usable as a clean boost pedal!! Awesome!

Pretty simple to use, even though there are tons of different ways you can use this pedal.

First off, to roll the volume on and off you use the big pedal. To see where you're at with the awesome LEDs, you have to be powering the pedal. If you don't want it and/or don't want to power it, you can still use it as a regular volume pedal without powering it but you won't get the LEDs which I find are very useful.

Inside, there are two internal knobs that you can adjust the volume output with as well as the clean boost preamp. Set it to however you'd like. I set it so that when I max out the volume pedal it boost the signal as well.


The Tuner out is there to hook up a tuner for silent tuning even with the volume all the way down, the tuner out still sends volume to your tuner, very cool. And you can run the pedal in mono or stereo out. The pedal itself is very smooth when in use with your foot. From seeing it and playing with it with my hands at the store counter it looked and seemed clanky, but when I put it down and actually tried it, it turned out to be one of the smoothest pedals I've ever used!

Technically since it's a volume pedal I shouldn't be rating the sound quality, but since it has a clean boost preamp built in I can.

The volume pedal itself is active for the most part and therefore, includes s sort of buffer that's engaged when it's plugged in and set in active mode. This is visual sound's idea of true bypass but better as it acts as a buffer too bringing back any signal degradation that you might've had from the rest of your board or long cable runs etc.

The clean boost itself is very very transparent. Depending on how you use it, even if it's maxed out it will add a large amount of volume, maybe around 10db but will also add, not distortion but, clipping, i'd say, depending on what your amp's set at. Which is also cool and useful if you're running on high gain through the amp and you're looking to push the amp into that saturated-esque super heavy uber metal distortion!

I personally love this pedal. I don't know what I would do without it, it's your basic volume pedal taken up 10 notches! You can do everything you've originally done with older volume pedals and more! The LEDs are also very very helpful on stage and are very bright for the stage! I love pedals that are made for live use! This is definitely worthy of that!

I'm just not totally sure of it's construction yet, I've had it for a while and have treated it well but I just still don't know yet how long it'll last before it becomes a train wrecked piece of equipment. Everything looks like its made of plastic? Not sure..
Did you find this review helpful?yesno
Cookies help us improve performance, enhance user experience and deliver our services. By using our services, you agree to our use of cookies. Find out more.