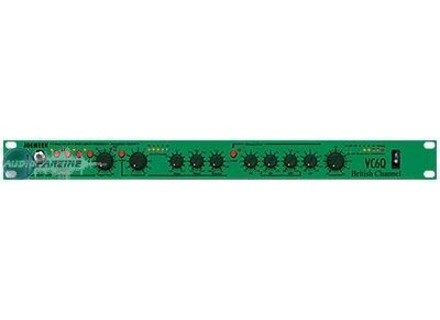 View other reviews for this product:
(Originally written by Lonewolf/translated from Audiofanzine FR)
Channel strip with preamp, compressor, 3-band EQ (fully parametric mid). Each section can be switched on/off.

Cheap finish (as if it were home-made) but it's not really that important.

Intuitive use. It's not always simple to use a compressor but this one is quite easy to set. The controls are effective and allow you to quickly find the adequate setting. The same applies to the EQ. A beginner won't have any problems with this unit.

No noise even when the unit is connected to a cheap mixer.

Here is where it becomes interesting. Don't expect a preamp with the most transparent sound! It has a nice sound character with a slight growling effect in the low mids (the name "British Channel" is not a coincidence) and the compressor section adds a bit of thickness to the sound.

I've read several times that this Joemeek preamp generation (I never tried out the new 6Q, 1Q, 3Q, etc.) is very useful for male vocals and I totally agree. But the unit is also great to record bass and electro-acoustic guitars live.

I used to own the Meekbox (a previous generation) but I had to sell it and I regret it a lot. The VC6Q is a logic development of the Meekbox where the enhancer section has been replaced with an EQ (which is a good thing).

I use this preamp for thrash/death metal vocals. It sounds perfect since I have a deep voice. The dynamic response, sound color and thickness of the VC6 make it the perfect tool for this particular application.

For rehearsals I feed the preamp with a Sennheiser E835 and its output goes to a TC M300 effects processor I use for deessing and reverb.

I haven't had the chance to do a recording with my Oktava MK219 but I don't see any reason why the result shouldn't be good.

As a summary, you might find this jewel secondhand for a nice price, but it's getting tougher because the owners don't have any real reason to sell it... It's worth the money.
Did you find this review helpful?yesno
Cookies help us improve performance, enhance user experience and deliver our services. By using our services, you agree to our use of cookies. Find out more.