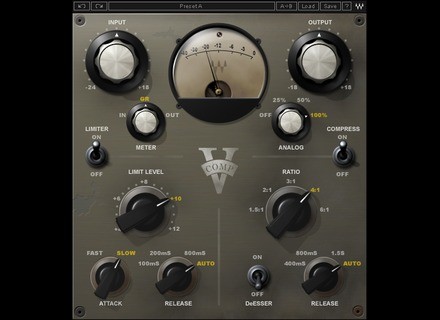 Buy this productView price information >
View other reviews for this product:
Waves has a TON of different compressors. In fact, they have so many that I tend to forget which ones to use for which genre most of the time. This is yet another vintage style sounding (and looking) compressor with the advantages of today's technology and precision. With the built-in DeEsser, this is really meant to be used on vocals more than anything else, but you can actually use it on nearly anything. I can't imagine using the DeEsser on stuff other than vocals, but the actual compressor portion can work nicely for something such as lead guitars. The plugin has adjustments for input, output, analog switch, limiter on/off, limit level, attack setting, release, compressor on/off, ratio selection, release and DeEsser. To use this, simply enable it on your vocal buss and start adjusting from there. It's simple enough to where you shouldn't need to read the manual.

I've never experienced a single issue while running these plugins, and I don't really expect to. Waves is pretty famous for being one of the best companies when it comes to overall stability and performance. The plugins are always rock solid. The plugins themselves are cross platform compatible, so both OS X and Windows users alike can utilize these without any issues. It also doesn't take up too much RAM, which is a huge plus. There is one issue, however. This is a 32 bit plugin, and I'm not a huge fan of the way my DAW implements these. My DAW is a 64 bit DAW, and for me to use these, it launches a special bridge application. It's a bit annoying as they disappear while in the background. I'm hoping that Waves updates these in the future so I don't have to keep using this app. I've been using the Waves bundle for the past six or so months, and it's been one of the best purchase decisions I've ever made.

This is mostly for vocals, and it works great for the more rock kind of vocals than anything else. If you're doing some heavier stuff like metal, you most likely want to search for something else to use on vocals as you'll probably be crushing them to hell and back. Despite this being a vocal plugin, I've actually gotten a pretty cool lead guitar sound by turning off the DeEsser and adjusting it for light compression. There are tons of Waves plugins for compression, so be sure to check them all out and see which one you like the best.
Did you find this review helpful?yesno
Cookies help us improve performance, enhance user experience and deliver our services. By using our services, you agree to our use of cookies. Find out more.