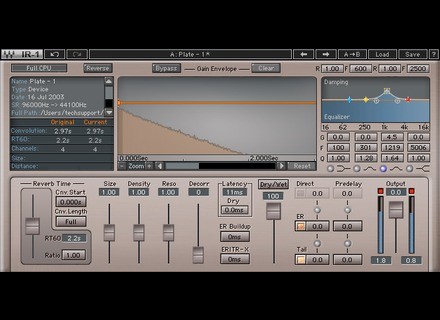 Buy this productView price information >
View other reviews for this product:
The Waves IR-1 is a convolution reverb plug-in for native systems. It’s a great addition to any DAW looking for a very realistic sounding reverb that can wear a lot of different hats. You can buy this plug-in on it’s own, but for whatever reason it’s just available for native (LE) systems. It comes in a few plug-in bundles as well, but not all of the major ones include it – I think just the Mercury bundle has it of the larger bundles. The interface of the plug-in has a lot going on, so it’s going to take a little bit of use to get completely comfortable using it. I will say that it does give you all of the desired controls and more here. Included is the ability to choose from a variety of different presets, as well as settings for the reverb time, size, density, resonance, decorr, mix, EQ, and a number of other helpful controls. Most users are going to be able to figure out how to use it without the help of the manual.

The system that I’m running the Waves IR-1 is Pro Tools 9 on my home rig. I’m running it on a Mac Book Pro laptop that has a 2.2 Ghz Intel Core 2 Duo processor and 4 GB of RAM, while I run Pro Tools with a Digi 002R audio interface. I’m able to run this plug-in pretty smoothly, although I should say that I run it on an auxiliary channel always to save processing power anyway and would recommend doing the same. It’s hard to say how well it’s going to run on a less efficient system, but being it’s a native plug-in, I’d think most systems could handle it.

The Waves IR-1 is really a great sounding reverb plug-in. It’s not my favorite overall reverb plug-in, but I wouldn’t be surprised if some people preferred it to the rest. I personally use TL Space mostly, but I do use this plug-in a good amount as it provides you with more controls and has an overall great sound. It’s not the cheapest plug-in, but what can you expect being that it’s Waves and a heavy reverb plug-in. A great reverb plug-in is definitely a must have and you’ll get one in this…