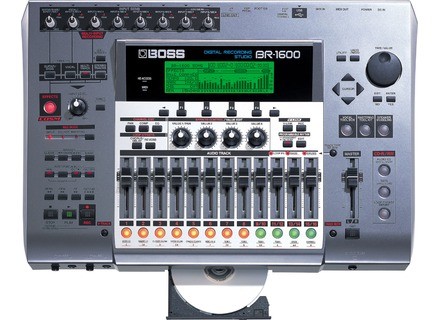 « Loaded with effects for vocals and guitars »
4

View other reviews for this product:
The Boss BR-1600CD is a well made digital multitrack recorder with an efficient interface and well places sliders and buttons. This recorded has plenty of effects on it that you can use with anything mainly vocals and guitars though. Using this recorder you will love how the interface is, it is very easy to understand just by looking at it and not even opening up the manual. You can figure everything out within the first hour of using it just because of how everything is places.

Connecting this recorder to your computer could not be easier because it is just a USB connection. There are 2 analog outputs and 8 XLR analog inputs. There are plenty of faders on this recorder to, it has a total of 13 but one of them is for the master.

The Boss BR -1600CD is a decently sized console but it is very light, it weighs around 10 pounds. If I could make a change to it I would make the screen a little better. It feels rather cheap, I would add a full color LCD display because for the price of 1500 dollars I at least want a LCD screen that I can enjoy looking at.
Of course the main feature of this console is the record right to a CD feature which is the main reason why people would purchase it because they would not need to have a computer to record anything with. If you do not like dealing with computers for your demo tracks then this is the way to go. You can completely cut out the computer to do your demos and mixes. I would not purchase this recorded if you need something portable, because it is light but the size of it is a little bigger than I would want to carry around with me.