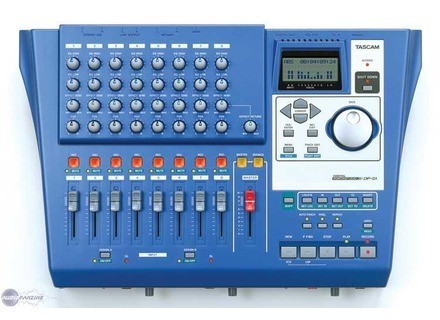 View other reviews for this product:
The DP-01 has two 1/4 in. TRS mic inputs for dual mono or stereo recording. The DP-01 has a USB 2.0 jack for file backup and transferring files to a computer, There are analog RCA line outputs, a headphone out and S/PDIF line output, as well as each of the 8 channels having an effects send.

According to official specs the sampling rate is &quot;CD quality 44.1kHz/16-bit.&quot; Problem is, no one with the capability to record at 24-bit would ever go slumming it in the 16-bit realm. Oh, how I wish I had read up more before buying. You will notice the difference.

It will record eight tracks uncompressed audio to an internal 40g harddrive, which is really nice. Each channel of the DP-01 has a 45mm volume fader, plus dedicated controls for pan, effects send, high EQ and low EQ. An LCD display shows meters, editing settings and locate points, though it is not a lighted screen so a desk lamp of some kind is a MUST to use this thing.

As far as knobs and faders, its like running a mixer and self-explanatory. Navigating the menus is a whole 'nother story. Some will find difficulty, other will adjust and learn the ins and outs. I don't have a lot of patience for overly complicated menus, especially on such a beginner bottom-run-of-the-ladder piece of equipment such as this so my opinion is that they could have streamlined it and given it a more user intuitive interface than a couple VCR style buttons. This thing is NOT a Portastudio. Getting started is pretty easy though, and the manual does help when it comes to editing/copying/pasting/saving/deleting functions.

The concerters aren't great. Maybe that is why Tascam just discontinued it because it won't be hard to replace it in their lineup of products.
There are no effects, because I skimped and bought just the DP-01 and not the DP-01FX, but I read the effects were terrible quality anyway.

For your money, I would buy the cheapest 4 track that records in 24 bit, because you can't record 8 tracks simultaneously on this anyway. This is a definite step up from my Yamaha anolog 4-track days, but I was still disapointed and wished I had dropped more money. I would buy one of these if you got it real cheap and used it as a portable studio for scratch demos only.
Did you find this review helpful?yesno