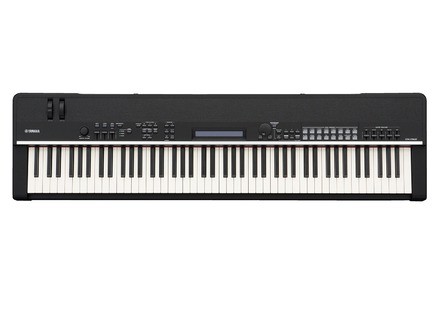 View other reviews for this product:
Everything has been said about the characteristics. Connectivity, a positive for the XLR outputs, and a negative no MIDI thru (which is heresy and a complete misunderstanding on my part, short ...) which requires me to have a small thru twelve o'clock on stage box solution, not cool ... a time of minimalism

The sounds and effects level, there is everything you need, see a "piano" ...

Touching excellent, because a good balance in the "hardness" to play the piano and Rhodes. Well I'm not very objective I've always had Yamaha.

The manual I know I have not opened!

Side programming, good when you put his paws on machines for 25 years, is going to make it! It is not always easy, because it's pretty full level noon layer split and ability to act controllers on a particular section from + the keyboard master ... All on a LCD screen straight out of the 80s (remember the Korg DS8 !!) and 4 buttons naviguation ... But that, and I would speak later suits me perfectly, it's like antiseptics that give bad taste to the pellets Drill, "TU THE DOG INSIDE ANTISEPTICS "

Sounds suitable ... Me ... Side piano, I literally cracked the CFX!
I use the other piano sounds pretty rarely, but although they are it's useful. For cons, the absence of CFX on CP40 asks me the question of the usefulness of the latter! This is certainly a history of budget but truly prohibitive for me between the two difference.
Other sounds appropriate to me, all the EP DX are terrible, the Rhodes very well, I do not want to nitpick compared with competitors, it's so tiny, general sounds well I take it that there but just in case of need because it is "coupled" with Kronos ... This is primarily a piano, but with the advantage of having other sound and play audio files on USB for p 'Plans tits ...

I've had six months, but it has taken a while the guy !!! For many years I was looking to replace my old P200, and CP4 I fell in love at the announcement and photo appeared on the web. So why? Because I always play with 2 keyboards, a heavy touch and a light touch, a piano and a workstation, and I wish that the keyboard is very close to the top of the piano below. And will program and change the sounds on stage with a Nordstage and WS posed above ??
It's ergonomic design that pleases me the most, it is small, and all controls, buttons and LCD are very close to the keyboard, like that, with obviously hacked because it does not exist I want to stand Kronos above comes flush with the keyboard CP4 and at least I do not have a height difference of 40 cm between two hands! Added benefit, it is light !!!

So in conclusion: While it's plastoc BUT IT IS NOT AFFECTED YOU LIGHT certainly programming is not easy with this "small" screen and the "little buttons" if you do not usually, BUT YOU ARE NOT TOUCH WELL PLACED .... All that was conceived and organized around a "physical" ergonomics and weight that suit me perfectly.

It really is a stage piano, made for all styles, programmable for all circumstances, very docile and malleable with a workstation as master, and especially integrating all confiques. It is ridiculous to compare it to a SV1, which is a piano made to live "alone" given its shape and quickly programmable ... You do not buy an instrument because it has a sound of Rhodes 0.57% superior to the other, but for what he propose in ergonomics, opportunities to adapt to his personality and the type of work we do with.

Of course I would do this choice because given my criteria and needs, it is the only one on the market yet ...
See the source
Did you find this review helpful?yesno
Cookies help us improve performance, enhance user experience and deliver our services. By using our services, you agree to our use of cookies. Find out more.