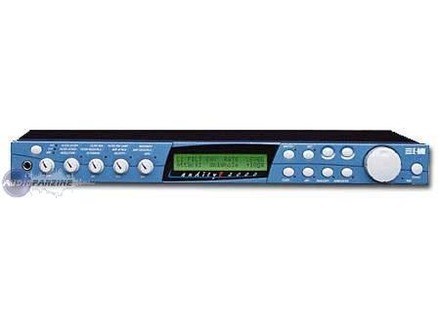 View other reviews for this product:
The Audity synthtiseur 2000 is a form of expander-based multilayer Wave table (known as multi timbral) and have the know-how E-mu. Depending on the version of the expander, it has a 32-voice polyphony (64 votes for version 2).

His arpgiateur is complete and trs trs labor. It produces both Młoda that rhythm parts. It's possible to play simultanment up 16 arpgiateurs simultanment.

It possde April 1 buttons in CONTRL CONTRL facade that allow up to 12 paramtres in real time.
It possde 6 outputs and output numrique.

The sample set is of great quality it has a shuffled know Mo Phatt, Orbit and Proteus 2000.
The filters are not aggressive, but he benefitted from the Z-morph and 12 pole filters.

If you are your habits with expanders such as E-MU Proteus Orbit or the operation is exactly the same.

And biensur, like all E-MU sound modules, it can receive a suplmentiare ROM sounds.

The editing features in real time are very practical. As for its operation, it is fairly simple and well thought.

Fast Fashion patch for the sound, he sytme Submitted on 4 layers of modular stackable and which areas are layers parameter.

For cons, the temperatures requiring read the instructions because the expander as a fairly compact, it does not have srigraphie to inform of possible functions. You have to juggle your jog buttons and the main facade.

The E-mu exapandeurs have a formidable running ergnomie found on a wide range of their product. Which if you had a dj expander E-mu in the hands, you'll have no difficulty on matriser.

The Audible is really high quality. The rhythm section has an impressive and dynamic layers of synthse are simply superb.

Curiously, despite his age (1996), has given the Audity an original and a new "color" Audible in my environment that I have not found with other machine.

The only regret is that the pitch varies by only + / -7 semitones. Can do a desire not to "dnaturer" the original sound.
Finally, MIDI controllers do not follow the General MIDI standard. (For example, the cutoff is 21 instead of 74). So it ncessite a small gym adaptation MIDI controller. I prcise the MIDI implmentation is complte.

This module is not made out of sounds aggressive but plutt hypnotic patterns or layers of high quality.

E-mu has a grain of his Yamaha, Roland and Korg do not exactly possde. That is why I chose this since I use MODEL December 2004.

Finally, I am fully satisfied with this product even if I have not done all around.
See the source
Did you find this review helpful?yesno
Cookies help us improve performance, enhance user experience and deliver our services. By using our services, you agree to our use of cookies. Find out more.