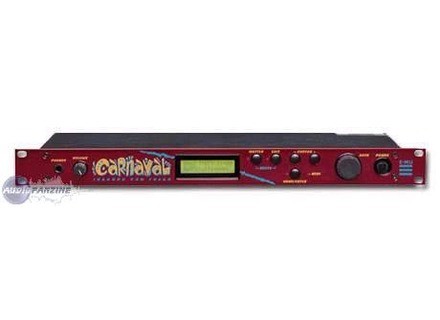 View other reviews for this product:
If Jean-Michel Jarre had to produce an album for Kasave Matchucambos or he would need the Carnival. But the same goes for Johnny Clegg and Peter Gabriel. The Carvanal is like a spice that we keep couscous in the cupboard in case ... but when you need it, it really well.

Of the same generation as the Orbit 2, Audity 2000 and Planet Phatt: either 1996-1998, the Carnival is just as difficult to program due to the low number of sliders and a single dial. But good for what he has to do well.
it would have hurt to put around 6000 francs at the time in this type of module, but when I see one can buy today for less than 150 euros, doubt no more.
It is from the Carnival and have consolidated all sounds World, Ethnic, Latin and Cajun Country, that E-MU has released the module PLANET EARTH, lavish on the latest prod P. Gab.

As the modules E-MU at the time.

E-MU does not know off the head with their series of modules dedicated to sounds or genres.
The architecture is similar from module to module. Only changing the ROM and the front at the same time.

thus, there are 640 internal presets with 32 still 6-pole digital filters (17 types of filters always different) and 16 multi parts and polyphony 64 voices (lacks a bit of qand also used in the force percussion and ambient sounds at once). The management of partial is a little weird but good.
Sounds. It is not my cup of tea but it sounds. I prefer by far the Planet Earth but for the price of Carnival today ...
Go ahead Fracky is good ...

Pink Martiny to Mori Kante, one could imagine that Carnival meets all applications and all styles, the answer is no.
However, the Carnival will be a unique non-restraint and its application to spice up your compositions will be very appreciated and if it is not necessarily for yourself, it will be by the listener.
This is not nothing.
See the source
Did you find this review helpful?yesno
Cookies help us improve performance, enhance user experience and deliver our services. By using our services, you agree to our use of cookies. Find out more.