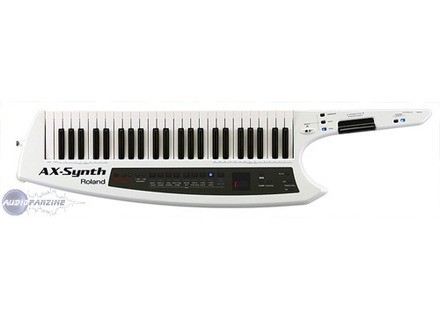 View other reviews for this product:
4 octaves dynamic without aftertouch, 256 sounds with 128 voices of polyphony, editable via software download free at Roland. The connection is made directly to the PC via USB or MIDI in / out (both are always active). Sitting in use, you can connect a sustain pedal, very practical, because there are some good piano sounds in this keyboard and even with 4 octaves, it remains quite playable even if the keys are relatively short.

The configuration is simple for the main functions (sound selection, save favorites, management controllers. For cons, the record becomes essential for the functions accessible by pressing and holding the shift key: you can then change the pitch The mode selection buttons of the handle (to transpose permanently or just when pressing, variation or change in a bank), and adjust the sound volume and its shipment to the reverb (Stored in a favorite memories of the 16).

[edit] One big negative however, when changing the sound, there is a cut of half a second. Envelopes and effects abruptly interrupted, and it is a shame because with the two banks of bookmarks and buttons to increment programs, everything is there to soon follow many sounds in concert. There must be ahead of the curve and stop playing a bit before changing his. Hopefully a software update can solve this problem ...[/ edit]

There are sounds for all tastes, from classical piano to guitar metal (very good). Sounds "Supernatural," too few and not always well chosen are obviously derived from this synthetic AP-Synthesis in the V-Synth GT (I own too), but less expressive, partly because of the absence aftertouch). In the special sounds, there are also voices "scat" from Roland, a good surprise because they are simply excellent (in my opinion, of course).

For the rest of the sounds, it&#39;s classic. There are too many for my taste similar presets leads, but a quick turn in the editing software shows the full potential of the instrument ... Indeed there are over 300 samples in memory, and patches are often built like Roland with 4 games to two oscillators each. Having had a JD-990 a few years ago, found in almost exactly the same architecture, without the ability to rearrange the modules and with fewer side effects. This is very comprehensive and allows us to go far in publishing new sounds.

[edit] You can change the order of modules (generator, filter, amplifier), in groups of two to four tones present in each patch in the form of various algorithms. After programming a sound via the editor, I found it fairly easy to use, since it is always easier on a computer screen than on a small screen keyboards.

But ergonomics is improved, particularly because the arrow keys on the computer are not recognized: Unable to scroll settings other than the mouse. This is disadvantageous to fine tune the settings for envelopes, but when it gets really hard to choose a waveform from over 300, it takes each time re-open the selection of sample to choose a new ...

Similarly, I would have appreciated being proposed mini MIDI player to run small loops to tweak sounds without having to play along on the keyboard to hear the result of editing.

In contrast, the AX-Synth is recognized in seconds by the computer (I&#39;m on Vista) and communication with the software is perfect.
[/ edit]

In the waveforms of origin, many Roland synths, of course (JD, Jupiter, JV, Juno ...) but also the Prophet, Moog and other analog junk. The pianos are also good, like the strings (stereo splendid!).

If one puts aside the scenic value, the AX-Synth Expander can be an excellent sounding Roland Typical.

I have this synth (as this is a synthesizer) only since yesterday, but having already had an AX-1 and many machines the grip was very simple. I love the concept of "all in one" and the quality of the original sounds + the opportunity to go further in their edition.

In the regrets I might make, there&#39;s no aftertouch, the relatively low sensitivity of the D-Beam compared to my V-Synth GT, lack of sound Supernatural, and especially the fact that for a keyboard stage also resulted, Roland does not offer any optional wireless stereo system, forcing users to use systems for guitar and bass. That sucks.

Another point that bothers me at first: I feel that the central area of ​​the strip pitch is wider than the AX-1, which does not allow management as good finger vibrato on the AX-Synth as its predecessors. I may quibble, but it&#39;s a shame because this controller is therefore more difficult to use than before.

Finally, Roland has focused on using as a laptop and synthesizers has somewhat overshadowed the party&#39;s steering gear. Yet it was a good start with hot keys to enable / disable sending MIDI data and the two buttons "pgm Exchange Inc. and in December," but we lose for example the two keypad zones present on the other AX. Normal since the AX-Monophonic Synth, but it would have been nice to have a lead sound internal right of the keyboard and samples triggered by MIDI on the left ... But I can not remove points because of it because the instrument called Roland AX and not AX-10: the shape is a continuation of previous AX, but the purpose is not the same.

I had an AX-1 eight years ago, sold some months later. I bitterly regret this sale when I saw the opportunity of Keytar rating soar after discontinuation of the AX-7! Fortunately, I received a very attractive discount on the price of the AX-Synth (nine to 630 euros) ... This time he is not ready to leave my config!

Plus I find it very beautiful ...
See the source
Did you find this review helpful?yesno
Cookies help us improve performance, enhance user experience and deliver our services. By using our services, you agree to our use of cookies. Find out more.