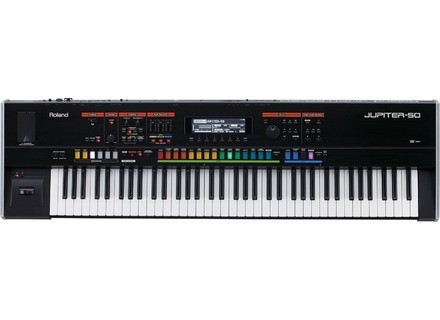 Jupiter-50, Digital Synth from Roland in the Jupiter series.

Buy this productView price information >
View other reviews for this product:
Difficult to go after Lekanut, an expert in synths and especially Roland, but I'll make a little "summary" of this beautiful synth.
6 octave keyboard, synth type, with a very nice touch (but not aftertouch). Very good build quality, metal. I wish he had the wooden sides!
Sounds about 1500, more than 2,000 "live sets". Arpeggiator not easy to tame without a computer (prohibitive for me who does not use it).
Large enough screen, enough for a live game.
Very light for a keyboard of this type (11 kg).
I think it is a very beautiful instrument, with all colored buttons.

This is a synth made to live. It is very rich in sounds of all kinds. Can of course edit in depth, but in this case use menus, sub-menus, sub-sub menus ...
It therefore contains two categories: raw sounds themselves, and live sets, which are, as their name suggests, made to live. They include between one and four sounds, usually enriched by effects. Opportunity to create their own live sets (2500 personal sites) and call them quickly.
Front, only 2 knobs for the filter (cutoff and resonance), but it's something.
And on the right, a USB music player, very practical, with the possibility of loops. I'm used to play arpeggios including 2 songs Muse (Bliss and Map of the problematique) because I could not do it with the arpeggiator.
Small defect, the volume of presets is very different from one sound to another, so think about adjusting the volume before playing in a group or live.
Fatal flaw: no aftertouch

The strong point of this synth!
The raw sounds are divided into Supernatural Supernatural Acoustic and Synth.
The acoustic sounds are excellent in all categories. For example, the string sounds, either guitars or violins, how to play an enormous impact on the velocity, and suddenly makes the nuances that a real guitarist or violinist to bring his game
As for electronic sounds, they summarize 40 years of history of synths, with hundreds of patches of old Jupiter, Juno, SH and other brands. There is something for everyone.
And Live Sets are very very powerful.

I'm not a purist analog, and I did not know the old synths, so I was not shocked by the name of this synth. But from what I understand from reading the forums, the Jupiter 50 and its big brother the 80 suffered from this marketing coup. I think if Roland had appointed otherwise, they would have been more successful because they are really beautiful machines. I got it for € 1,590, whereas initially it was 1990. But I think even the price at which I got high, € 1,200 would seem to me more accurate (especially with the new Roland FA that are more complete and have as many sounds).
I sold six months after purchasing it, as pure keyboardist, lack of aftertouch has bothered me a lot. I opted for the Kurzweil PC3LE8 (nine for only € 1,100), which by itself has replaced 3 of my keyboards (Jupiter for the richness of sounds, the Roland FP 4 to touch piano - a little less hard, however, - and arranger Yamaha PSR 1500 for the sequencer).
I do not have that choice today, but I'm still happy to have possessed, because as I said, it's a nice keyboard with great sounds. However, before buying, think 2 times and properly assess their real needs.
See the source
Did you find this review helpful?yesno
Cookies help us improve performance, enhance user experience and deliver our services. By using our services, you agree to our use of cookies. Find out more.