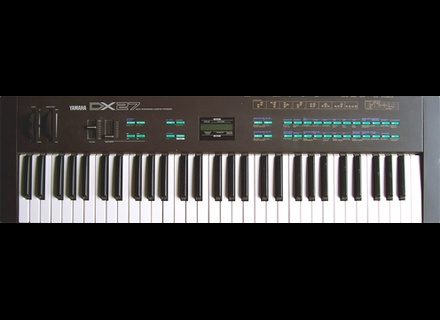 DX27, Digital Synth from Yamaha in the DX series.

View other reviews for this product:
(Originally written by elriton/translated from Audiofanzine FR)

I'm not too complicated, I just pick one of the user presets. Possibility to switch between different banks.

The sound editing is totally empirical. You'll need a good number of hours with this synth to get to know its real possibilities.
Avoid theoretical approaches! FM synthesis on the DX range was perhaps the biggest intellectual rip off in the pro audio world of the 20th century.

The user's manual is clear but there's nothing like real-life experience.

The easily identifiable sound of the DX range requires you to process the sound with effects or mix it with something else in order to hide the synth's characteristic sound.

The sounds aren't realistic. But then again which synthesizer sounds realistic?

The keyboard isn't velocity-sensitive. But you can play with an expression pedal via MIDI. In this case it's very empirical again.

I only miss a pitch envelope like on the DX21 and the DX7.
Did you find this review helpful?yesno
Cookies help us improve performance, enhance user experience and deliver our services. By using our services, you agree to our use of cookies. Find out more.