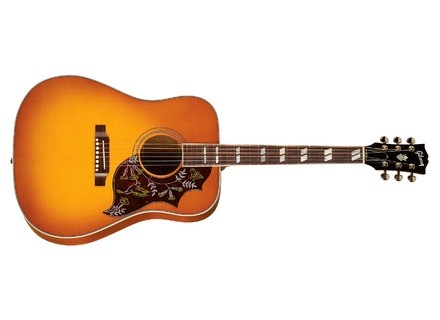 View other reviews for this product:
I went to the local guitar store in Virginia to test out the Martin DC-28, which has been my dream acoustic for as long as I can remember. When I got there, I pulled the Martin off the wall and played away, and fell in the love with the feel of the Martin. From where I was sitting, the tone was certainly better than my Ibanez acoustic. Then the Manager comes in, and asked if I had tested the Gibson Hummingbird Pro on the wall. I rebutted, no, I am here to test the Martin (and thinking, what is this guy doing since the Martin is right under 3k). The guy tells me to listen to him play both guitars while I stood back (to hear the real tone which you can’t hear well while you are the one playing). I could immediately tell that the Martin was WAY "twangy'er" than the Gibson, with much more high end. The Gibson sounded much fuller, like your favorite rock tunes. I then played it and while the playability was ever so slightly easier on the Martin, I am all about tone.


Looks and sounds great. Pick up seems good, nice tone. My complaint would be with the action, way too high at the nut and bridge. My tec said he could get it to play like my Taka mine, low, smooth and buzz free. This is a beautifully constructed instrument. The playability of this guitar is fantastic. It has a nice deep sound that Gibson is famous for. Great action on the neck. The electronics in this guitar are good as long as you have a good amp to play through.

The highs, mids and lows resonate fantastically. The only real problems I have with it are the neck needs to be adjusted due to the fact that it isn't straight, it isn't off horribly but still, it isn't straight. And the other problem is the pickup; it's awful.

High Quality guitar, it cost a pretty penny though. But if you can afford it I say go for it! You wont be disappointed.
Did you find this review helpful?yesno
Cookies help us improve performance, enhance user experience and deliver our services. By using our services, you agree to our use of cookies. Find out more.