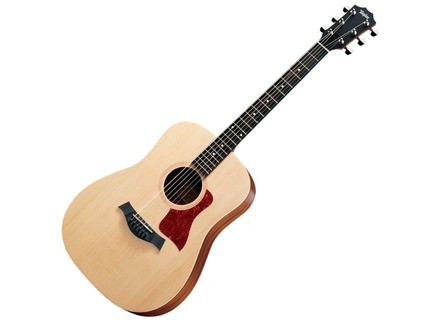 View other reviews for this product:
I purchased the BB at West LA Music, in Los Angeles. They had a blow out sale where you bought one guitar and could get another one that didn't exceed the price of the first one. I didn't intend to buy any guitars but couldn't let that opportunity go away.
I needed/wanted an decent acoustic guitar but my budget, considering I didn't plan on buying any guitar, was limited. As I walk to the acoustic guitar showroom and glanced around and as soon as I see a beautiful and "raw-looking" Taylor marked for $538 (with soft gig bag made also by Taylor), I could not believe it. I didn't know Taylor made "low-end", or let's say affordable, models...


As soon as I grabbed it I felt in love with it. As soon as I pick a guitar I always play a G9, it's one of my favourite chords and I know how I like it sounding... and it sounded elegant, bright, and with the right punchiness, although the BB excels in the treble and mid response more than in the bass. Again, I could not believe it that it was $538. I asked a salesman to make sure I was not flipping out or the price was wrong.
I hadn't tried any other guitar for that price with such clarity, awesome balance between lows and highs (considering the price), sustain of notes, and crisp sound.

My two only little concerns, however, are: its sound lacks the well-rounded body that its big brothers have, which has to do mainly with the wood used and the size of the body; but let's keep in mind we are talking about a guitar that does not cost $2500; the action is pretty tight, like in most acoustic guitars, although some are softer than other, but I guess you can customize it to your liking. I use Elixir strings, which I love for their sustain, clarity and longevity (long-lasting), but it is a bit hard to bend.

The Taylor Big Baby is characteristic, and it is obvious from just looking at it, for its fragile look, that comes from the raw or unlacquered finish (close to a beech finish) and the thin sheets of wood that are used for its construction.
Also, it features two screws located at around the 15th fret. I thought they were cool even though they are exposed, and this is just personal opinion, some people don't like them, I just thought it was peculiar and gave the guitar some character. Turth is that they really don't have a negative effect on my playing.
It is true, however, that it is not a very solid instrument. You can see it on the joint between the neck and the body, it's not the best and most strongly supported joint, which actually makes the neck slightly "crack" (you just hear a sound) if you put too much pressure of the neck (in the first frets area).


It's a very light instrument that I use for jamming, but mainly fo practicing and recording. I love to have it close to me for when I need to experience with a new idea.
And its physical attributes... I just think it is a beautiful guitar, simple, raw/mate color, that as a matter of fact I hang above my coach. I just to love to look at it, and definetely to play it.
I have seen it for over $700, and I would still love it had I purchased for that price, but it would hurt a little bit. For the price I bought it, for still being a well made Taylor, I don't think there is a better quality-value guitar out there. Maybe similar models, in the same price range, of TACOMA and ALVAREZ YAIRI could get close or be at its level (my ex-girlfriend had an awesome TACOMA, I can't remember the model, with bigger body but very similar attributes - awesome instrument, and same price range - consider these two brands as options if you are considering to purchase the Taylor BB).
Overall, the Taylor Big Baby is exactly what its name implies: a smaller body guitar with humble material that excels above his competitors (price wise - $550).

NOTE: I rated this guitar with a 5 considering what it features (sound most importantly) and comparing it to what other instruments for that price offer.