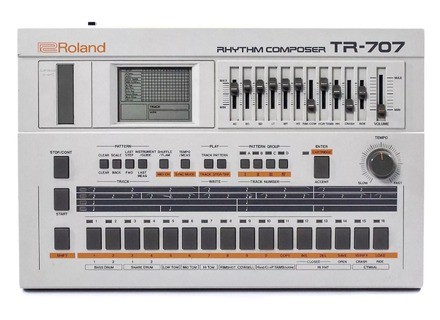 TR-707, Drum Machine from Roland in the TR series.

View other reviews for this product:
Drum machine with 85:
- Stereo output. headphone output. input switch start / stop, midi in / out, old sync + dyn + entry trig, an input / output for audio backup.
- 10 separate outputs for sounds
- 13 volume buttons for the sound, a flight master +
- All pads to program patterns and songs, and a large display of the current pattern.

side sequencer rather limited: 64 patterns, four songs, which can be extended to three times more with optional memory cartridge almost impossible to find. note so severe limitation for this technique.

Well, there are few opportunities, so we quickly made the rounds on the technical side, and by dint of work above reflexes are acquired quickly to program rhythms. not bad to be starting a small card with various key combinations.
mode pattern in step or live, is easy to use.
Mode song, He may be a little less flexible when making a song longer than 84 patterns you can juggle ... is a technical limit leads in all cases required a repeat ...
accents, flam and shuffle it possible to give a little life.

next doc, I got the French, which is simple but they had the bad idea to translate all the terms, which is then sometimes confusing, it caused me once or twice on the head of the details. must be said, translating "snare drum" with "snare drum", or pattern by "pattern speed" sounds a bit far fetched ... in short, I had less trouble with the English .. .

system backup audio is fun: it's blips, you create a little audio digital signal that save the current memory ... it works very well as long as you make a backup of digital media ... against at the time by when it came to use tape, it must be unstable.

MIDI sync works well when it is a slave to a sequencer, for cons in master's pretty heated (I tested sync with logic on pc) ... of the sudden I program my song, I put it in slave and I start playing with my sequencer. Then MIDI is limited, the ability to send notes are only sequencer song by against no possibility to recover the bike, there are only flying by external sequencer.

Side sounds, it is usually quite discredited, he is accused among other ways ... rather his kicks for my part I find ideal to work on a machine that has its own personality, which was not used to all sauces ...
to rap or dance, it can be cheap, though good compromise with another bar ... for the electro or pop, for cons, I find it very well.

because it has one big advantage: its separate outputs, which can send a mixing desk and effects ... a quick kick to the low eq solve his problem, then you can spend sounds effects distorted, it can.
but already I find the sounds at the base rather pleasant, almost as if we had mixed acoustic and digital sounds ...

and then you still have to admit one thing: having a bar over analog samples, there is a little something extra that is heartwarming in terms of dynamic and not a potato chouilla of breath ...

So I did a month ago, I'm glad (but serious about the notes).
it is "too" simple compared to the current bar (and again ...), I simply push the limits and looking for a good dose of creativity to make it sound. at least one is certain of having to use 95% of its capacity (basically I have not taken the value of trig and start / stop pedal).
So the good sound that can operate with its separate outputs, which involves a simple mastery fast. and then it is not expensive in time, especially when compared to its big sisters ...

but hey, with the sub, I would have probably fallen for a more powerful style e-mu or elektron ... but this is not the same rate.
See the source
Did you find this review helpful?yesno
Cookies help us improve performance, enhance user experience and deliver our services. By using our services, you agree to our use of cookies. Find out more.