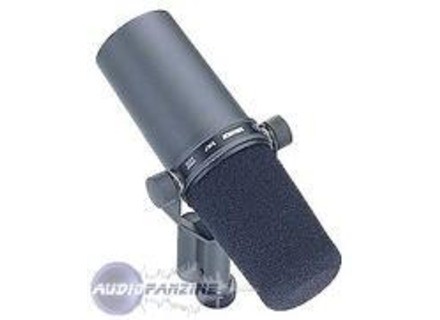 SM7, Dynamic Microphone from Shure in the SM series.

Product replaced by the Shure SM7B.

View other reviews for this product:
This is a dynamic mic that works great for live settings as well as in the studio. With a particular kind of pickup pattern, it's got a cool kind of sound. It's not the most expensive mic in the world but it probably costs more than most dynamic mics except maybe the 421 and similar mics. It has a really cool sound and is useful in a lot of ways.
I can use this mic more often in live situations. I've used it on lead vocals in live shows countless times. It's great if you're in a venue with feedback issues as it only picks up what is directly in front of it. I also like it on horns and kick drums as well for the same reason, as its still a dynamic mic it'll pick up a lot but won't be too loud or noisy.

The cool thing about this microphone is that it only picks up the frequencies that are directly in front of it, so it's great at minimizing bleed in a vocal signal. It's not something that a singer can hold in a live situation, obviously, but it's great for singer/guitarists really. Since it blocks out sound from certain directions, it doesn't really sound like most microphones, and as such it'll have qualities that I don't think you are used to hearing in mics, but I'd say overall it's pretty accurate. Only a trained ear would really notice such detail, and it pays off by isolating the signal. In the studio as a scratch vocal it's capable of blocking out excess noise but it'll get a good sound of the whole vocal. I know engineers who swear by its use for professional vocals but I don't think that I like it as much as a good tube mic or condenser. Anyway it's useful and not too expensive and can be a dealbreaker sometimes, so I highly recommend it.
Did you find this review helpful?yesno
Cookies help us improve performance, enhance user experience and deliver our services. By using our services, you agree to our use of cookies. Find out more.