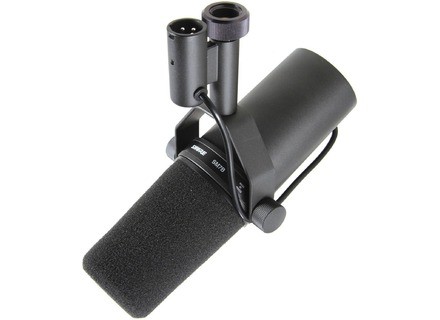 SM7B, Dynamic Microphone from Shure in the SM series.

Buy this productView price information >
View other reviews for this product:
You see these in a lot of radio studios and recording studios alike. I never tried one of these because I was under the impression they were strictly for voicover work. How wrong I was. This is a dynamic mic in function but I believe the sound is more in the condenser range. It's one of those acts like this but sounds like that mics you see pop up. Apparently it's meant to be a very balanced mic and I'd say that's a fair description. It's a very neutral sound.

Oddly enough, I first came into contact with one of these during a live session recording. I had seem them before being used on vocals, but in this particular setting I was given one to use on my own vocals. I looked at the engineer like he was crazy. It was a live acoustic session. I had a guitar, drums, and an acoustic bass, on top of me singing. The engineer assured me it would sound good. SO we did it. Ended up sounding great. There's something about this mic that makes it sound very at home with acoustic instruments on vocals. I later bought one and tried a lot of experimenting with it, and found that it did much better in laid back mixes than full band mixes. To be fair, it's very hard to find a mic that fits both these situations. Most only do one well. I really like the SM7B for vocals in acoustic music. I cut a whole album with it actually. I've come to the conclusion that for home recording on a budget, this is very solid vocal mic. You really can't go wrong for the money. It does require a bit of EQ based on what sound you want it to have because of how inherently neutral it is. Honestly though, I found that half the time is sounds pretty good untouched. It can be boomy if you have a low voice. But no worries. Just cut it at 200 hz.
Did you find this review helpful?yesno
Cookies help us improve performance, enhance user experience and deliver our services. By using our services, you agree to our use of cookies. Find out more.