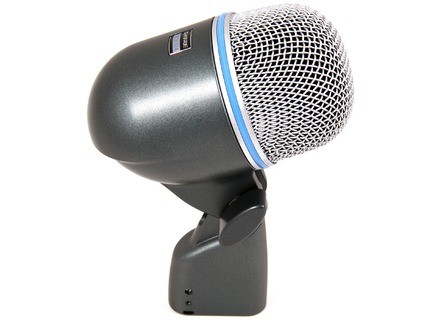 BETA 52A, Dynamic Microphone from Shure in the BETA series.

Buy this productView price information >
View other reviews for this product:
The Shure Beta 52A is a dynamic microphone used in both the recording studio and live setting. I have used it mostly in the recording studio, but have seen it used on a stage as well. It is an effective microphone in both situations in my opinion. The Beta 52A is one of the industry standard microphones use for kick drum. It is the perfect shape for sticking inside of or in front of a kick drum. It has a mount that makes it easy to swivel and place inside of the kick drum. While it is primarily known and marketed as a kick drum mic, it has a number of different uses beyond the kick drum.

I've been using the Beta 52A for about three or four years. When I was deciding what type of kick drum microphone to buy I decided to buy both a 52A and an AKG D112 and shoot them out to see which I liked better for the sound I was trying to achieve. In the end I end up keeping the D112 and selling the 52A, but this does not mean the 52A isn't a good mic. I liked both of them, but I felt the D112 had a better sound for recording kick drum, while I liked the 52A better for micing and bass drum cabinet. I record more kick drums than I do bass cabinets (as I usually record bass direct) so I decided to keep the D112. They are around the same price, which is reasonable, so I made by decision based on what I needed more for my needs. This being said, the Beta 52A sounds great on both a kick drum and a bass cabinet and is a great all around microphone for picking up things with a real low end. If you are looking for a bass guitar amp mic or a kick drum mic I would encourage you to check out both this mic and the AKG D112.
Did you find this review helpful?yesno