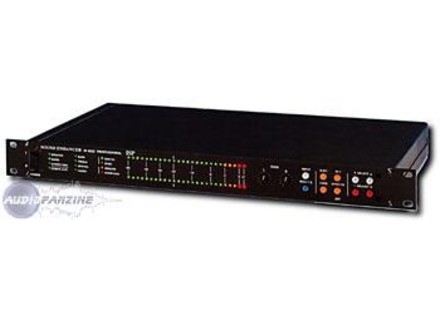 converting frequencies of 20 to 50 Khz to 44.1 or 48Khz + various tools for error correction and so on.
Cumulative Effects

or compressor / Expendables (combined with the first 4 tools but not the last 3.

There is also a generator and a dethring stereo-mono and gain pots.

and saw a very good meter

It weighs over 4kg!

The device is so easy to use and allows the general or bypass each tool separately. The edition is a remarkable simplicitée (+ / - to the values ​​and <-/-> to move from one tool to another.

the manual is nikel!

The converters are really good (better than many 24-bit).

- The suppressor of crunches will only remove the most troublesome by cracking it against the incredibly well suppressed without affecting the signal which is very impressive.
- The low pass filter is very good but a pity he does not drop low enough
- The artificial generation of stereo (which has nothing to do with the stereo expander) is very effective but do not abuse autremen it colors the sound but subtilemen used, it can make a much better signal mono to listen with headphones
- Compressor / Expender is interesting because it does not work as usual compressors because it delays the signal to anticipate the ridges so that the compression is quite effective with virtually no pumping effect.
- The corrections are accurate and fairly mild
- Of the stereo expander is similar to that of a Finalizer TCelectronic

As for the qualitée convert, I tested it on a plate Revox C221 (broadcast model with XLR etc ...) and was made considerablemen more present, clear, defined and realistic (as in égalemen with the model 5021 stereo ISP).

The unit is very professional and faith at the same time super easy to use but at the price of the number of parameters is limited, but the compromises are quite sensible.

It's a pretty cool device and curious view its configuration (which is also available in Hi-Fi in the 5021 but with a reference uniquemen connector S / PDIF and analog RCA).

shame we can not use the compressor at the same time as the artificial stereo generator.

It may date to around 1995 and was worth quite expensive (standard AES / EBU and broadcast).

Globalemen, I would say that the device may one day but has features different from that given to treatments that I have met on other machines and qualitée issue, it has little to envy to a lot of current devices pity there is no access to more adjustment parameters. Perfect or even redoutablemen effective to convert the Alant or from a map or a sampler on its quality but has averaged in / out S / PDIF or AES. (Mid-range CD players, or MPC2000 Audiowerk2 example)
See the source
Did you find this review helpful?yesno
Cookies help us improve performance, enhance user experience and deliver our services. By using our services, you agree to our use of cookies. Find out more.