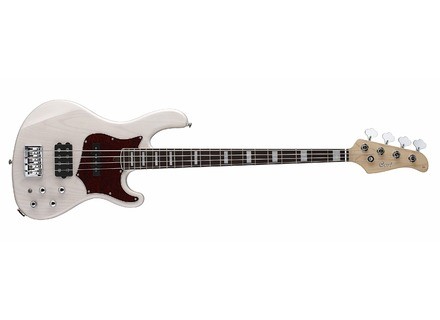 GB74, 4-string bass guitar from Cort in the GB series.

Super stick that glides on its own, despite the rosewood a bit kinder to the net ropes round home that I immediately replaced by flat fillets, before it digs too.

Relatively heavy body, swamp ash forces, but suddenly the race does not address.

Access to acute but not correct at a neck-through.

very average with the original pickups and especially difficult to move from one to another, the volumes are very different. JB very strong, much less see Mr. virtually inaudible.

In the beginning there was a lot of noise on the JB, repaired since its ground wire was not soldered!

Yes, I start on the fretless
I play on an old SWR.

I love the sound of Piezo, but hate the pickups but I think the change to have a more équilibré.Je'm probably wrong with my accustomed Vigier fretted.

I tried a Cort Artisan A4 but a big flaw on the neck of stringed instruments, a C4FL that did not sound at all.
And a secondhand Godin, who had a piezo and no microphone which seemed a bit limited, but eventually ...

For the price I would do without hesitation that choice, but they should put in Cort mics worthy of the name.
See the source
Did you find this review helpful?yesno
Cookies help us improve performance, enhance user experience and deliver our services. By using our services, you agree to our use of cookies. Find out more.