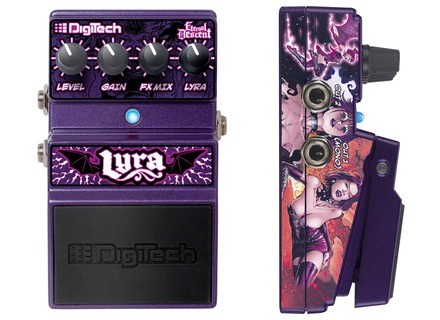 Eternal Descent is a cross-genre story that blends elements of fantasy, action, music, superhero, gothic, science fiction, supernatural and other elements into an ongoing saga featuring Lyra, the series’ heroine. Created by writer Llexi Leon, the comics revolve around the exploits of Lyra and her band, Constellation Nine, and rock and metal bands like Static X, Atreyu, Firewind, Shadows Fall and others have made guest appearances

The DigiTech Lyra is designed to deliver the tones, sounds and effects that producer/engineer Eddie Kramer (Jimi Hendrix, Led Zeppelin, Kiss and others) and his team used to record the Eternal Descent albums. Seven preset tones, from clean to moderate overdrive to crushing distortion are available that match seven songs from the albums, according to DigiTech.

The Lyra Multi-Effects Pedal is now available with an MSRP of $199.95.