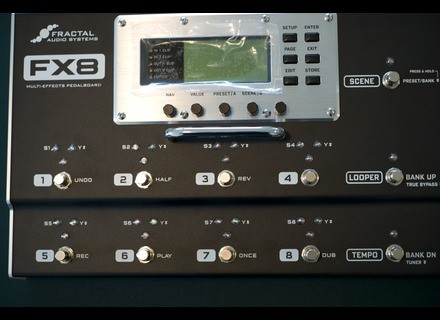 Fractal Audio posted on its forum the first details of the FX8, a brand new multi-effect pedalboard for guitar that will soon be available.

You can use up to 8 effects simultaneously, with free pre/post and parallel/series combinations.

The pedal also features a looper which time has been extended, though we don’t know the exact time, and supports MIDI Program Change, CC and Scenes. You can also use it to switch your amp channels.

Regarding the connection panel, Fractal Audi says the FX8 will host two inputs for expression pedals, four relay outputs and a USB port for remote edition via the FX8-Edit software.

Note that the power is internal and universal and the FX8 will feature a true bypass.

Full details are expected soon, Fractal Audio did not communicate the release time and pricing.