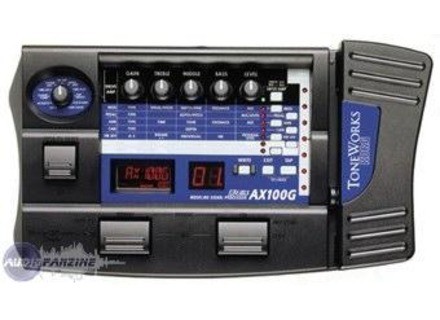 View other reviews for this product:
I got this thing as a birthday present, from guitar center. I think it was about 150 bucks.

I like it because it has a lot of different effects in it, and is easily programmable. Its got a halfway decent delay, and the amp effects are cool. I also made an awesome effect out of a defect in the pedal's expression pedal. It has an echo effect, and with the expression pedal, you can change the echo time on the fly. But, if you go crazy and use the pedal like a wah with the echo setting, you can get some really crazy psychedelic sounding stuff out of it. It almost sounds like a DJ scratching. I'd buy the effect if I could find it in an individual pedal.

Well, its got plenty of bells and whistles, but nothing is exceptional. The wah is waaaay too digital for me, and most of the other effects sound too fake and cheesy.

Its plastic, i haven't put any serious tests on it, and i probably won't try testing its durability. Treat it like you would anything else thats electronic.

Well, i'd call this thing the jack of all trades pedal. I'd much much rather have all the effects in individual juiceboxes, but for 150 bucks, what do you expect? Its great if you want a lot of effects, but don't have the cash to be spending 100 bucks on each one. I don't use it all that much, but it comes in handy every so often.