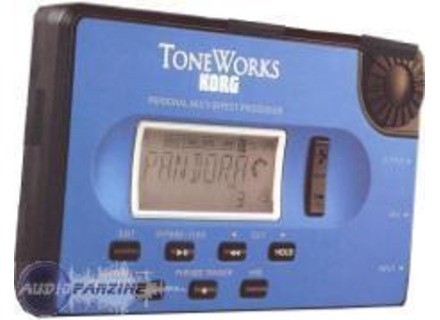 PX3, Multi-Effects for Electric Guitar from Korg in the Pandora series.

View other reviews for this product:
Korg Pandora PX3 is a multi-effects box that I have used with electric guitar and electric bass.  The unit is a digital one, and can be used with any electronic instrument since it has standard 1/4 inch connections for input and output.  The PX3 has a variety of features including effects, recording, and drum patterns.  It isn't rackable as it is in a simple box form.

While I really have only used Korg Pandora PX3 for effects, I've always found this little box easy to use.  Pulling up the presets and scrolling through them is quite basic and easy to do, as is playing the rhythmic tracks.  Beyond this, I haven't used the box for anything else, so I can't say how easy to use the other features are.  This being said, from what I can tell everything is pretty user friendly, but I would suggest having a manual around if you are planning on using everything that the PX3 has to offer.

The sound quality of the effects of the Korg Pandora PX3 are pretty good overall.  There are definitely some interesting presets, but I can't say that I've been blown away by any of the effects.  All of the presets have the ability to be edited, and I believe that you can save them as well.  I've used the box in a variety of different set ups, but mostly with a Gibson SG and a '76 Fender Twin Reverb.  While I wouldn't use the box for recording, if you're looking for a multi-effects unit for shows or just to mess around with, the PX3 will do the job.

I've been using the Korg Pandora PX3 for a number of years, as it was one of the first effects boxes of this type that I used.  The PX3 is no longer being made, but you can find them used at a pretty cheap price.  I would generally shy away from using multi-effects boxes as they don't share the same quality of individual effects, but if you're looking for an effects box that can give you a number of different basic effects at the push of a button, I'd recommend checking out the PX3 and the later models in this line of effects boxes.