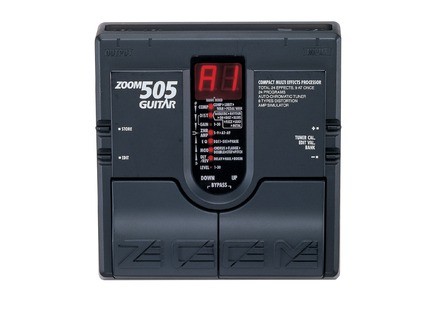 View other reviews for this product:
I bought this pedal at a place in London, Ontario called John Bellone's Music. I bought it a couple of years back when it was a fairly new release and paid $199 for it. I bought it because I had screwed around with it abit in the store when it first came out and I liked it.

EFFECTS EFFECTS EFFECTS!!!! It has an endless supply of effects, and if ya get bored with the ones pre-programmed, you can make yer own. Crystal clear sound too!!!

I dont like that you have to plug it in, that's probably me just being lazy though. It has a battery option, but the battery life is like 4 minutes, which is understandable. ITs a mini computer.

The Zoom 505 Guitar Processor is an amazing pedal, if you got some cash and your not afraid to experiment, grab one. I gaurantee you that you wont be dissapointed.