Electric solidbody guitar with JZ/JG body from Fender belonging to the Jaguar series.

The Modern Player is Fender's entry series. Manufactured in China, these guitars can be considered Super Squier models: for instance, we noticed that Fender was not as thrifty with the lacquer layers... Today, we will review the Gibson-inspired Jaguar and the Marauder, a wink to the instrument that never saw the light of day back in 1966, but equipped with the brand new Fender Triple Bucker. We won't review the Telecaster Plus (three pickups) nor the Thinline (P-90) nor the bass guitars. All instruments are available at the same price $400 (except for the Jazz Bass that sells for $500).

After launching many products in the early 60's (Jazzmaster, Jaguar, Mustang, ...), Fender assembled two different guitar prototypes to create the Marauder, a new instrument based on a Jaguar and a Stratocaster that never hit the stores. The first prototype was equipped with a tremolo bridge, three pickups and nine switches for tone variations! The second prototype had a hardtail bridge and the pickups were hidden behind the pickguard! The Marauder had already been announced, photographed and included in Fender's product catalog. It had even been ordered... Like the '57 Gibson Modern, the Marauder remained a mystery due to its high manufacturing costs. The legend says that there were eight Marauders actually manufactured, making it Fender's rarest guitar...

Let's go back to our Marauder Modern Player! You'll immediately notice that the guitar didn't inherit the myriad of switches from the original instrument. You get two pickups: a Jazzmaster-type single-coil in bridge position plus a triple-coil on the bridge controlled by a Strat-type five-way toggle switch. Yes, you read well: you get a real triple-coil pickup, not a single-coil+humbucker combination — it's almost like having a volume control going up to 11 on your amp. Here is an overview of the different pickup combinations provided by the toggle switch. A, B and C refer to the three coils of the Triplebucker (A next to the bridge), while N refers to the neck pickup:

The other features are less original... The maple C-shape neck has a rosewood fretboard, 22 Medium Jumbo frets and a 25.5" scale length. The headstock is equipped with vintage-type machine heads requiring you to cut the extremity of each string and insert it into a hole before winding the string up. Two controls (Tone and Volume) and a Strat-type tremolo bridge...and that's it! There is another unusual detail caught our eye: the body is made out of Koto, an African wood rarely used for guitar manufacturing, at least not often enough to have fans or detractors. Certainly Fender used this wood for cost reduction reasons. However, I noticed nothing unusual when playing the guitar. As a summary, you face a guitar based on two legends: the body recalls the Jaguar, while the electronics and tremolo bridge are inspired in the Stratocaster. 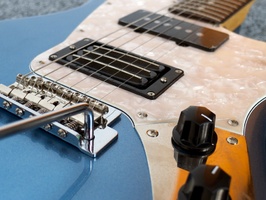 I had no problems except for the tuning stability of the tremolo bridge. But with a new guitar this is rarely a problem: don't forget that a classic and simple tremolo bridge can work perfectly if you pay attention to the friction points on the bridge and the nut. Consider carving them a bit so that they match the thickness of your strings (this also applies to very expensive instruments) and rubbing a pencil on the friction points (graphite helps the strings to slide better through). Apart from that, nothing seems to be fragile or improperly made on this Marauder. The neck feels very pleasant and inspiring, although the combination of a long-scale neck and a Jaguar body is pretty surprising. All five pickup combinations are pleasant, appealing and special. The sound ranges from very thin and twangy (position 3 is the least twangy) to full and rich (especially with position 4 combining all three coils of the Triplebucker). To wrap it up, this pickup combination recalls a HSS Strat with the center pickup next to the bridge pickup and the bridge pickup of a Jazzmaster to produce a rather low-level output and a very contoured sound.

Below, you can listen to all positions from 5 to 1 in clean mode.

And below a "real life" example with several positions.

Finally, the sound of the guitar in distortion mode while playing with the toggle switch and the volume control.

The Modern Player Jaguar is a rudimentary guitar compared to the Marauder. It is also strongly inspired by Gibson: you'll rarely (or even never) see a Fender guitar with a tune-o-matic bridge, a pair of P-90 pickups, and a LP/SG-type three-way toggle switch! The guitar has the same neck and tuners as the Marouder, but the scale length is shorter (24.75" in the Jaguar and especially Gibson tradition!). Also notice that the guitar provides the musician with two volume and tone controls. There is no pickguard so that lacquer and wood are visible. The Jaguar is available in chocolate burst, red transparent or black transparent finish.

When I played both instruments unplugged, I found the resonance of the Jaguar better than that of the Marauder. In fact, its mahogany body resonates more. But once the guitars were connected, this trend was quickly reverted. The Jaguar is not a bad guitar at all, it has a sturdy construction and looks quite nice. But it seems that its hybrid concept just doesn't work that well. Where is the character and the personality of this guitar? In short, I find this guitar sounds too "neutral" and has a notable lack of presence and fullness. 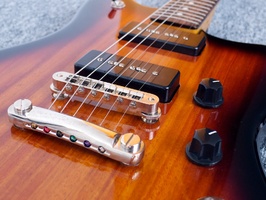 The most disturbing feature is the volume control. It's surprising that it is placed so far away from the bridge, just below the pickup, on a guitar with so much free space... Maybe Fender decided to put the control there to allow violining effects more easily... But I couldn't play more than a few dozen seconds without touching it accidentally. It's hard to get used to the position of the control, which seems to be a design error. It's a pity!

Below, you'll hear a sample with all three pickup combinations:

Clean sound once again, but more funky this time:

Finally, the distortion sound while playing with the volume control and the toggle switch.

Both guitars are definitely modern instruments conceived for Brit rock and pop: the different pickup combinations aren't suited for high distortion because they turn too noisy. The Marauder has something special to it — an extra that will please beginners, experienced players and even pros looking for a "small" guitar with a real sound personality both for live and studio applications. As a summary, the Marauder has something "Asterix"-like to it... What's that you say? It reacts fast and bravely, and the electronics are really clever! Plus, owning a guitar with a triple-coil pickup can be lots of fun! The Jaguar is also a good guitar but it seems to have less personality compared to the Marauder. Considering the price ($400), there's no risk in buying a Modern Player guitar, but you'll have to decide which one. Don't forget to give the Modern Player Telecasters a try, especially the Tele Plus and its three pickups. The Tele Thinline equipped with P-90 pickups can be an excellent alternative to the Jaguar.