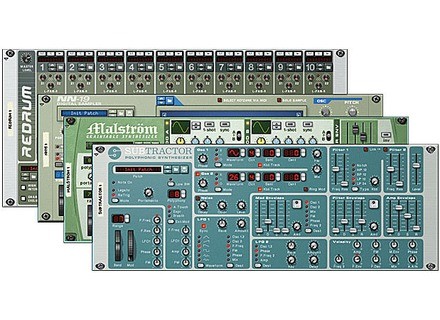 View other reviews for this product:
There is no audio recorder. You have to use another program to record audio files to use in Reason. Also there is no way to stretch the tempo of a file. You have to use one of their add-ins/devices. The Dr. Rex Loop Player will time-stretch audio files. You also have to purchase another software program from them (RECYCLE) to be able to use the Dr. Rex Loop Player with your files. But that won't matter, once you start using the program. You'll evently get RECYCLE. Propellerheads software is top

The interface looks nice but its not a standard interface. You have to create your song by creating/adding different devices. Once you learn what each of the devices does, you be able to add them when you need them. The keyboard shortcuts will give you headaches at first.

The sound quality is the best I've heard. I compared the same drums I used to use in my other software programs and somehow Reason makes them sound more crisp and more pronounced. You're sounds won't sound as flat.

Reason was create so you can throw away your hardware. Embrace technology. If your PC is your hardware, put Reason on it. Also, Reason has very, very low PC requirements

I love it so much, I wish I had pictures of the Props (Propellerhead Developers). I would carry the picture around in my wallet. They don't know what they did for an aspiring hip-hop producer. My first song I made using Reason was better than anything I've produced in the past 5 years. I even tried to figure out a way to clown it, I always ended up thinking, there is no way I could've did what I do in Reason with the program I used to use. I've had Reason for about 3 months, and none of my stuff sounds the same anymore. I've been taken to another level.

Originally posted on FutureProducers.com
Posted by: biggrome ( 2-, 2004)
Did you find this review helpful?yesno
Cookies help us improve performance, enhance user experience and deliver our services. By using our services, you agree to our use of cookies. Find out more.