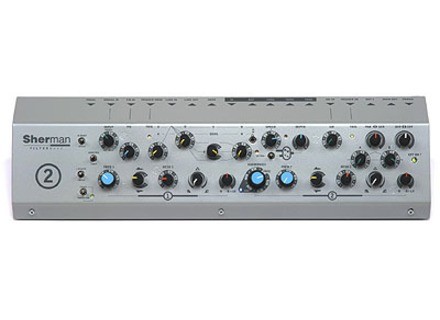 View other reviews for this product:
2 100% analog filters "mono" or "pseudo stereo" of adjustable low pass to high pass; With multiple modulation sources which trigger envelloppe and lfo, FM, saturation, harmonic tuning of the filter résonnace 2, etc etc ... Note a large number of input jacks modulation source to the rear .. .

Not a bit. Say that knowledge in analog synthesis are more extensive to understand this filter, advanced features and make the most.

it depends on what you want to do, can be very simple as very complex. In all cases it is almost a real instrument in its own right and in my opinion it is completely oriented towards experimentation and sound exploration.
In other words it's not plug and play but it's not what it was designed either (though see below)

The manual is clear and sufficient?
Yes, absolutely complete and so well written (in French please) that it becomes a source of inspiration.
Those who understand laminated ...

The effects are they effective, responsive and realistic enough?

What are we talking about exactly?
This is a resonant filter in the circuit with an input which allows to obtain in addition to the saturation (or even thousands).
So very typical, even violent with their own personality, that's why I love it. I is not violent as many have written ... sometimes racy and impetuous sometimes soft and smooth it is you who tweak ...
I saw an interview with the designer (which tests each filterbank in person) who said he had created to replace preamp Marshall ... once you know it is easier to understand why and how sound this thing ...

Suitable for electronic music ... there's no doubt it's in my studio and stay there long ...

Which instruments do you use? Which ones do you prefer, you hate?

As was said in another review, it is not the filter that comes modulated synth but almost synth that will modulate the filter, in all it's a bit like ...
if I tried to drum loops, this is the bomb, one or two synths routed in, this is the bomb, I have so many things to go inside

I have 2 months and I have tested a lot of filters on samplers, synths and softwares ... for now it became my reference ... It has its own identity and it is beautiful!

For the curious take a look on the web and see sherman artists who have used the site: carl craig or the chemical brothers (! On all their albums), when we know some textures are recognized elsewhere .. .

What I like most: his character, all its possibilities, infinite ... And of course ANALOG SOUND!

Money: very good if it takes time (I think yes). More by buying new you have a MUG sherman in the box then there is the offer unbeatable ...

I would do this choice 200% one day or another I'll buy a second ...
See the source
Did you find this review helpful?yesno
Cookies help us improve performance, enhance user experience and deliver our services. By using our services, you agree to our use of cookies. Find out more.