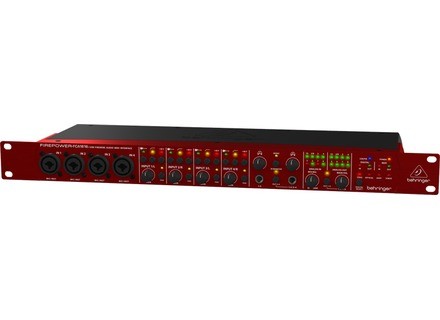 The digital audio interface market is very saturated (pun intended) with lots of brands and many new models struggling to find their niche.

Who can blame us for being indifferent to new announcements from the manufacturers… However, when Behringer introduces a USB- and FireWire-compatible interface with 16 inputs/outputs, ADAT, and four mic preamps sporting the logo of the mythical mixer brand Midas (bought by Behringer some years ago) for only $250, how can we not be curious about it?

Because on paper, the FCA1616 takes on everything that the market currently has to offer. But does that really translate into facts? That's what we are about to discover…

The interface in 1U rack format weighting 4lbs (1.8kg) is dressed in red, which might make Focusrite's Scarlett jealous! It looks very well built, buttons are solid and the pots slide smoothly, but they feel a bit loose… The front panel is pretty busy given that the mic inputs take up one third of the space with their XLR/1/4" jack combos. You can use them to connect a mic (no kidding!) but also an instrument after engaging the corresponding button to the right of the inputs. For line level signals you need to go to the rear panel where you have four available inputs (5-8). For every mic input you have a low-pass filter (at 75 Hz with a 12 dB/octave slope), phantom power, a -15 dB attenuator PAD and, as we already saw, a button to activate the instrument inputs.

On the right hand side we find the first nice surprise: the FCA1616 features two totally independent headphone outputs, each with its own volume pot, and with the possibility of assigning outputs 3/4, instead of 1/2, to the second pair of headphones. So you can send the same or different mixes to both headphone pairs, a very good point. It would've been useful to have a small "mono" button for musicians who only use one earphone when recording. At the top we have a series of LEDs that allow us to see the signal modulations on the eight analog inputs/outputs, even if only with one LED per channel — by no means a level meter. Two pots help us control the level of outputs 1/2 (which are meant to be connected to your speakers) or the level of the eight analog outputs simultaneously, and the mix of the signal entering the interface and the one returning from your sequencer, which will come in very handy when tracking.

Finally, a selector allows us to choose different digital inputs/outputs because, indeed, the FCA1616 does feature digital inputs/outputs! On the rear we have TOSlink connectors for channels 9 to 16 (ADAT) and RCA for channels 9/10 on S/PDIF. It's striking to have these options for such a price. Competing products, which are still more expensive in this market segment (Presonus, Focusrite, M-Audio, Lexicon…), feature only S/PDIF but never ADAT — whenever they actually provide digital I/Os.

Besides the digital I/Os, we also find USB and FireWire ports on the rear panel, because the FCA1616 can afford the luxury of being compatible with both, which is something we can only appreciate from such a cheap interface. We wouldn't have been shocked to see only a USB connector… We also have MIDI I/Os on 5-pin DIN connectors, which will please owners of non-USB controllers. In addition to the eight balanced outputs and four balanced inputs on TRS jacks, we also noticed there are eight inserts, which is worth mentioning given how rare it is to find such features on entry-level interfaces. This FCA1616 is definitely surprising…

And what's the result once plugged?

Regarding Mac drivers, it couldn't be easier, since it is class-compliant, meaning we connect it and it works. No need to install anything. Under Windows, you will need to install either a USB or FireWire XP-, Vista-, Windows 7- and 8-compatible driver.

Let's go to the heart of the matter at hand. To test the interface we connected it to our Audio Precision APX 515 measurement unit. We first tested both the line and mic inputs with 40dB of gain and at full throttle, and then the line outputs (refer to this article for more info). Here are our results: 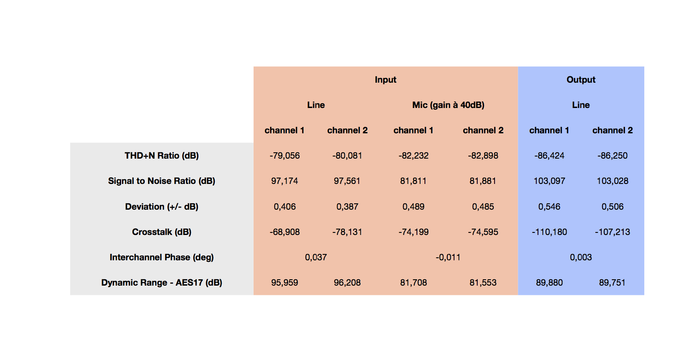 A first observation: the preamps offer 46dB of input headroom (60dB analog input+output) and the pots' taper is a bit too exponential. THD+N and signal-to-noise ratio are similar to the ones we can find on small M-Audio interfaces. We observe attenuations in the frequency response on both ends of the spectrum (-0.5 dB at 50 Hz and 15 kHz). We can also see that crosstalk is a bit high at the inputs. So, even if it says "Midas" on top it still remains an ordinary entry-level interface, nothing more and nothing less. No miracles to be found here this time. It must to be said that the FCA1616 provides a lot of things for its price, but it is also true that the logo of the famous mixer manufacturer on the interface made us expect more. Too bad.

In terms of line inputs and outputs, the frequency response of the inputs is OK, even if the THD+N is worse than that of the Fast Track Duo we tested recently. The same goes for AES17 dynamics. When it comes to the outputs, it has an honest frequency response but its signal-to-noise ratio and headroom values are below those of the M-Audio.

The purchase of Midas by Behringer has allowed the German brand to add the famous logo to its audio interfaces, but make no mistake: in the end, the audio performance of this FCA1616 is typical for an entry-level model. No miracles to be found here this time... which is a good thing for competing products: if on top of its number of inputs/outputs and price (around $250) it had an impressive sound…

So, would we recommend this FCA1616? If you need all the inputs and outputs and only have $250 in you bank account, you won't have many choices, because this is the only interface that meets such criteria. If your budget is a bit higher or you don't need as many inputs/outputs, it would be wise of you to look elsewhere in order to get a better audio performance.