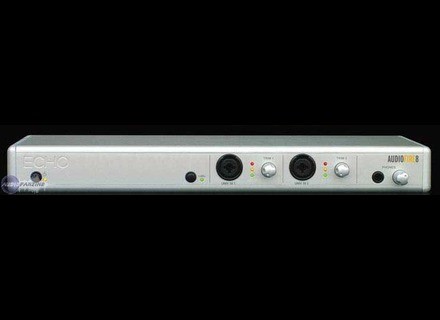 Audiofire 8, FireWire audio interface from Echo in the Audiofire series.

View other reviews for this product:
Interface 10 in 10 out FireWire (IEEE 1394a)
Came with 2 combo preamp and phantom amil
6 line inputs on TRS
8 line outputs on TRS
1 stereo input / output SPDIF Coax
1 headphone output with volume
The case of the interface is entirely aluminum (good for heat dissipation)
There is a button on / off (unlike the practice-101 edirol fa))
Despite the 6 pin firewire connection in which normally provided the amimentation, the interface is in need of a cord-like PC power supply to operate. It is of course provided and does not complicate the implementation as a separate power supply for example.
Rack of fixing strips are provided in the box.
The manual is in pdf format on the installation CD. (No paper manual)

S drivers installs in a snap (1.05).
I have also flashed the interface (1.04) (it has a built-in firmware ... well done!)
Control of the software interface is well designed, we can mix all the inputs to n 'matter which of the outputs).
The graphics are clear and controls are intuitive.

The drivers are ultra stable.
"I had a Delta 1010 (m-audio) before buying the audiofire8 and" I was looking for a firewire interface that can 't get a sound quality equivalent as well as a similar latency.
I'm not disappointed, the sound quality is equivalent and even lower latency asio with the audiofire8.
The preamps are correct and the headphone output although it n 'there is nothing to s' faint.
As against the converters are exellent and the potato is at the rendezvous.

I use it for a week.
This interface is really great.
Only negative: the connections on the rear jacks are so close together that it is impossible to use Neutrik connections. It is stupid to the manufacturer saw the pro side of the product he would have thought that users would seek to use such connections.
NB: neutrik NP3X agree.
Despite this imperfection, I recommend this interface, that is a marvel.
As an example, I have turned a 16-track arrangement (24 bit 44.1 khz) encased in plugins with a buffer of 64 millisecond latency for no-click two or stall.
I have also managed the effects of a live voice during a rock concert all in 96000Hz with a buffer of 96 for a latency of one millisecond and it '... All concrete was happy!
See the source
Did you find this review helpful?yesno
Cookies help us improve performance, enhance user experience and deliver our services. By using our services, you agree to our use of cookies. Find out more.