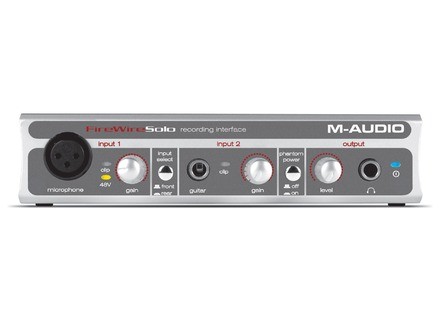 View other reviews for this product:
I'm tempted to say that the preamps don't count as a feature, if they don't work well. Kind of annoying since I was considering that as a feature when i bought it...

I had a hard time installing it on my windows xp system, i think mainly because i've been avoiding the sp2 update. I was able to copy the needed files out of my girlfriends laptop and eventually install it fine though. The unit itself works like a charm, and the software control panel is cute and works very well.

It's not low-quality in a needs repair sense, but I'm a little bit annoyed at how it handles the firewire interface. I was under the impression that firewire was &quot;hot-swappable&quot; like usb, and have been able to do that with other things. Not so for this... if it loses power or is unplugged while you're system is on, you will crash instantly. Additionally, it has an extra firewire pass-through on the back. Cool I thought, and plugged in my ipod to transfer some new tracks to it. Everything freezes when you do that. Can't even use the other firewire port on the computer itself when using this soundcard!!! What's the point of the extra port on the back of the unit???

The output is great, as is the input from the line-in. The mic and instrument preamps are seeming kind of weak though... although i haven't given them too much of a shot.

All this aside, I can't help but love the thing. I really just got it for the low-latency, which it delivers (between 5 and 8 ms usually). That alone has me feeling all mushy towards the thing. The super clean input and outputs also tend to make my heart race sometimes...

Originally posted on FutureProducers.com
Posted by: elevated ( 3-, 2006)
Did you find this review helpful?yesno
Cookies help us improve performance, enhance user experience and deliver our services. By using our services, you agree to our use of cookies. Find out more.