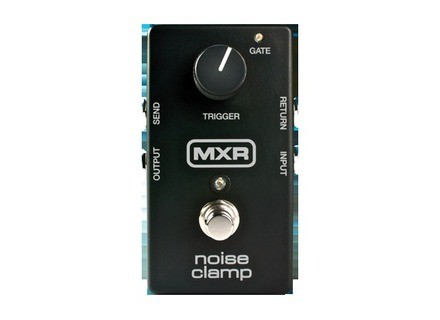 View other reviews for this product:
Pedal noise gate that works on the same principle as NS2 boss: you have a In for signal input, one out for output, and send + return in which the noise effects are inserted. Down to-26db.

very MXR in mind, so simple but subtle:
> Wholesale switch + led to whether one is engaged or not
> LED that lights up when the gate kicks in
> Internal setting that adjusts the bypass
> Power 9 volt or standard battery. For the PSU attention, as her sisters it plugs into the side against all the In, which is not necessarily practical ...

A button to turn off the playing faster or slower sound ... is simple but it's called a ukulele .... : D

In the preamble, small reminder of my config that is not necessarily the most common:
Guitar => Boss TU2 => In the noise clamp => send noise clamp => preamp (AMT electronics SS11) (chorus flanger + + analog delay in the effect of the AMT loop) => return noise clamp => out noise clamp => Poweramp (electro harmonix 44 magnum) => baffle

it's a chaining a little subtle in the pedalboard but ...

> 1st observation: it SOUNDS! not the noise clamp is not a eater sound like other similar products ... as the gate does not according to me the signal is not degraded.
> 2nd observation: it is sensitive. unless the send knob in the last third of the race, the gate waiting for the note to finish (more or less but still) before landing. Sometimes (I'll post) it's even hard to land!
> 3rd observation: it's powerful, it "catches" not bad hum / buzz just by enclanchant knob to zero.
> Fourth observation, which could be viewed as a quality or default depending on the style of music that is highly sensitive to the output level of the guitar pickups. Basically, on my Jazzmaster (though quite noisy, as the AMT), quite efficient with a low setting, even putting a lot of preamp gain. Idem, in the amount a little, with the pair of 490 of my gibson SG. Somehow, it is the level of "perfect" output: you can hold the note with great gain to feedback, and lifting the finger bang anything. on the other hand, with my Schecter and his pair of seymour duncan active, sometimes you almost think I deliberately and firmly mute the strings for the animal sounds, despite setting a little push ...

In short: a very musical noise gate, beefy, somewhat effective, but will be better in my opinion for bold blues and rock (even hairy) for the metal

To be honest, I fled the boss NS, I was wondering about the price of ISP decimator, and I'm also quite a fan of MXR pedals so I tested, and I do not regret it at all, even if based on uses, styles etc., it will not be a perfect noise gate at all.
See the source
Did you find this review helpful?yesno
Cookies help us improve performance, enhance user experience and deliver our services. By using our services, you agree to our use of cookies. Find out more.