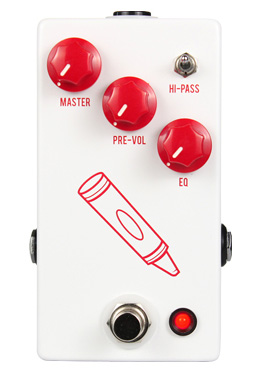 Although JHS and EHX seem to share the same inspiration for names these days, they explore rather different grounds as JHS's upcoming pedal is a fuzz, not an OD.

Inspired by the "Revolution"-ary sound obtained by the Beatles through plugging a guitar straight into a mixing console and creating the now referred to as "Direct-In Distortion", the Crayon is presented as a stripped-down version of the brand's Colour Box (no XLR function, no 3 band EQ).

The controls are Master, Pre, Tilt, and Hi Pass. “Master" is a classic volume control that controls the overall output. “Pre" works as a drive or fuzz control like turning up the pre-volume on a preamp to send it in to overdrive. At 75% and above, the fuzz will begin to gate out as you pick the strings harder when playing, it is announced as very responsive to the input signal and touch. The “Tilt" acts as an active tone control that is flat when the knob is at 50%. When turned to the left, the Tilt control boosts bass and simultaneously cuts treble, and when turned to the right, it boosts treble and cuts bass. The “Hi-Pass” toggle switch lets you activate from two different frequencies located on the side of the pedal, 200Hz and 750Hz: these settings let only the high band frequencies above them pass, allowing for some interesting tone shaping possibilities.

Although conceived to produce Direct-In fuzz tones, the Crayon is also said to cover more ground than just that, from subtle tube-like overdrive to classic rock distortion and all the way to spitting fuzz. It is also said to clean up particularly well with the guitar's volume, allowing to access multiple dirt tones with the guitar's volume control.

The Crayon is announced at $199 and shipping now to Dealers before shipping to customers everywhere starting November 27, 2015.