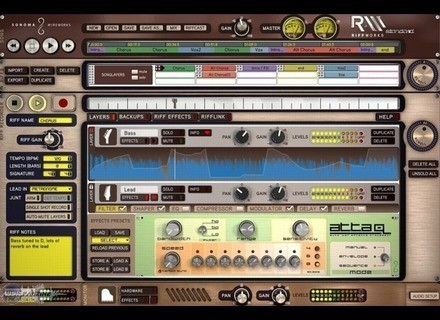 View other reviews for this product:
What is RiffWorks? In a nutshell, it's the world's simplest guitar recording software. You can select from standard drum tracks, set a tempo and then record multi-track guitar parts with different stomp pedal effects visually dragging and dropping sections to make up a song. It's so easy that you can download it and be up and recording in 15 minutes.

Sure, there are other more complicated recording packages, but if you want to focus on your playing as opposed to futzing around, RiffWorks is a great way to get started. If you don't have the opportunity to play with a band, there are plenty of advantages to having the RiffWorks Instant Drummer lay down a track.

Playing in time is one of the most important skills a guitar player can learn and it only comes from hundreds, perhaps thousands of hours of practice with a drummer. Of course there are advantages to having a real drummer, but you can also be sure that RiffWorks Instant Drummer won't drink all your beer. With Instant Drummer, you just pick the tempo, set the drum style you want (Basic, Chorus, Verse, Latin, etc.) dial up or down the intensity and variation and you're ready to go. The controls work in real time, so it's easy to experiment; just turn the nobs and decide what fits your mood. Sonoma WireWorks also offers additional drum packs for $9.99, so if you want to add specialized sounds, you can do that.

Once you've put down the drum track, you can record a riff. I usually record a rhythm guitar track and then double track with slightly different effects or pickup settings to get a richer sound. You can record multiple layers with different effects, pan to the left or right speakers and so on. Just press the big red record button. If you don't like it, delete it and try again. Once you've got a few riffs recorded, you can drag and drop them to arrange a sequence that makes up a song. It's dead easy. Assuming you've got a microphone input into your PC, you can add vocals.

I find myself using RiffWorks just about every day. I'll put down some basic drums and rhythm guitar and then loop them for hours trying out different solos as a way to experiment. Believe me, this is much fun than practicing scales.

Riffworks_effects_1 RiffWorks also has its own built-in effects. These include distortion, modulator, delay, reverb as well as a pretty cool auto-wah and compressor for getting great sustain. I usually use the effects in my Line 6 GuitarPort, which sound a bit better to me, but for those who don't use the Line 6 gear, it's nice that RiffTracker has the basics built-in. You can also use the the built-in effects to tweak the sound after it's recorded which is a nice bit of added flexibility.

Once you've recorded your masterpiece, you can save it as a WAV or OGG Vorbis file and, if you like, post it to RiffWorld, Sonoma Wireworks' community site. (You'll need to use iTunes or another program if you want to convert it to MP3 format.) RiffWorld lets you collaborate online to create songs and share them on the web. It's pretty amazing to hear original songs as well as tributes to classic rock songs with all the parts. This is the best testament to the power of RiffTracker. You can find rock, metal, pop, ska, funk --you name it. And if it's good enough for Todd Rundgren on his latest CD Arena, it's probably going to to work for you.

If you're still not sure about RiffWorks, get the Free Download of T4, a slightly cut down version of RiffWorks, from the Sonoma Wireworks web site. It doesn't have all the features of the full version, but it has enough to get you going and make sure everything's working. RiffWorks is available on both Windows and Mac and costs $129. For that modest investment, you get some great tools that will not only make you a better player, you'll have a lot of fun to boot! There's also a RiffWorks purchase promotion going on right now. You can save $30 with their online promo code, getting the whole thing for just $99. Considering the hours you'll get out of it RiffWorks, this is truly a bargain.
Did you find this review helpful?yesno
Cookies help us improve performance, enhance user experience and deliver our services. By using our services, you agree to our use of cookies. Find out more.