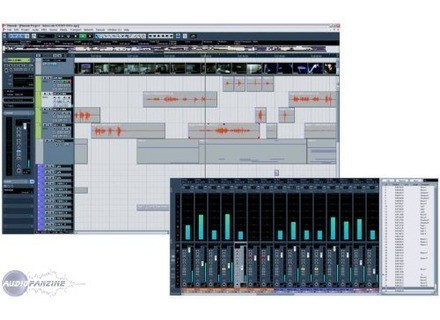 Nuendo 4, General Sequencer from Steinberg in the Nuendo series.

Product replaced by the Steinberg Nuendo 6.

« Excellent if you have the patience to learn it »
5

View other reviews for this product:
Nuendo 4 was my first DAW, and even though I've tried other options (some of them excellent, such as Reaper) I've always returned to it. While initial installation and setup are fairly simple, getting the most out of Nuendo requires a lot of time. Not because it's complicated, but because of the sheer amount of options the software offers to best suit your working style and workflow. Once you get the hang of the basic controls and hotkeys, which should not take long, you are ready to explore complex edition possibilities.

I never had any issues with any sound board (and I tried Nuendo on at least seven or eight different hardware configs) and while I've encountered my share of bugs and crashes, I've always found quick solutions all over the internet.

I currently run Nuendo on an old PC: 4GB ram, single core, Win7 32b. I've also used it on higher end system, but the fact remains that playback does not consume resources, and the only thing that really weighs on the program is the amount of sound FX, VST instruments and plugins you can use on each track. Video support works fantastic (and that's a must for most producers), though, once again, performance may suffer if you overload the mix with heavy plugins. An often overlooked flaw of Nuendo 4 is that it doesn't offer tools to edit video.

Crashes are common (but then again this true for most DAWs), though you can always find a work around every bug by googling a bit. On some occasions I've stumbled on some nasty bugs that actually corrupted my projects, and that's definitely a minus, but to be fair, that has happened to me in other DAWs also.

I find Nuendo very intuitive when it comes to basic edition. Just learning the ropes of the built in band eq and getting to know some of the basic bundle plugins gives you the capacity to face an easy mix. The automation panel lets you control a number of parameters, and it is a crucial tool for setting a good workflow. The edition tools are fairly simple to understand, though they can be modified in many ways to achieve total control over the sound. Despite all this benefits, the lack of standard music notation support is an unexplainable flaw, solved only by installing the Nuendo Expansion Kit.

As I said in the first paragraph, even though I've tried other DAWs, I find myself always recurring to Nuendo because of overall well balanced profile (works better than Reaper in terms of MIDI, easier than Sonar with video, it has a friendlier interface than ProTools, etc.)All of this, plus a high end audio engine make Nuendo an excellent choice.
Did you find this review helpful?yesno
Cookies help us improve performance, enhance user experience and deliver our services. By using our services, you agree to our use of cookies. Find out more.