In this antepenultimate installment, we'll discuss several points that you need to bear in mind to get an optimal final result, depending on how your music will be distributed.

If you have racked your brains to record, mix and master your songs, it's a good idea to consider how they will be listened to ─ the means of distribution are no minor detail in the delicate mastering stage. Whatever you choose ─ be it the classic (and old-fashioned) CD or the fully digital way with MP3, or even a video-only distribution via YouTube & company ─ it inevitably entails a specific rendering of your files.

Let's start with that '80s and '90s favorite, the good old CD. Besides the 16-bit/44.1 kHz limitation and the mandatory dithering we've already talked about, you need to take into account the requirements of the company that is going to press your CD. Some accept the files delivered digitally in .wav format, some others demand a burnt CD from you, and there are still some others that expect a DDP (Disc Description Protocol, a electronic file in a standardized proprietary format that contains all the data, including the audio, needed to replicate a CD). As basic as it seems ─ and precisely because of that ─ many people forget to ask the company in charge of the pressing beforehand. A real life example: Only yesterday, some friends of mine had to do without the nice master I had given them because they forgot to tell me they needed a DDP. In the end, they had to re-do everything themselves to meet their deadline. 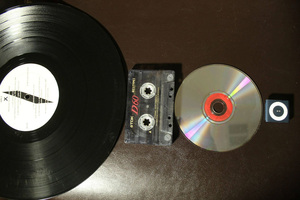 When it comes to compressed digital formats, if possible, use lossless formats, like FLAC or ALAC, which respect your music a bit more than that damned MP3. Whatever you choose, compressed formats do not tolerate intersampled peaks very well during playback/decompression, so you will need to consider a higher margin of error at the limiting stage when preparing the master. The maximum output level should never exceed −0.5 dB. Finally, don't forget about the metadata and carefully attach the tags to your songs, so that they are correctly identified by digital players.

If you are thinking about going retro and doing vinyl, there are some particularities you need to consider. First of all, you should know that the frequency range of a 33rpm record doesn't go below 50 Hz. Further, it is important not to open the stereo image too much and to keep the low frequencies in the center. Otherwise you may have problems when playing back the record on a turntable, like skipping, for instance. Finally, bear in mind the time constraints inherent to the medium and distribute the songs evenly between both sides.

And, to finish this quick overview, let's consider video distribution. The most important thing you should know is that the sampling rate ought to be fixed to 48 kHz and not 44.1 kHz. Apart from that, there are no real limitations, but common sense would say that, once again, you shouldn't abuse the stereo image. Most often than not, people watch videos on TVs, computers and even smartphones, in other words, systems whose main strength is not stereo playback, so take it easy.

Given the far-reaching possibilities of modern communication systems, you will most surely not stick to only one distribution channel. Therefore, it seems pretty wise to do several masters of the same song to be able to offer the best experience to your audience, regardless of how they listen to it.