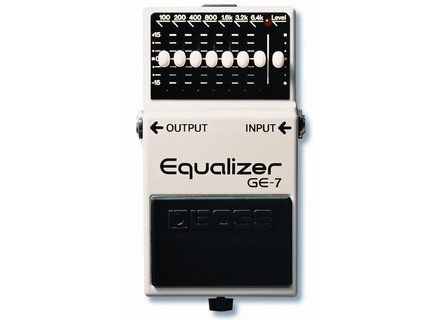 Buy this productView price information >
View other reviews for this product:
Everything has been said. (7-band EQ + volume, 1 In and Out 1, mono)
Metal case with standard Boss, the tough as usual.

Could not be more simple from the moment we know what a graphic equalizer.

Mine is a Japanese, not a twaiwanais, so I do not know if it comes from there (most reliable components ?!?), but I never had a problem with background noise or in the loop of effect (5150, front), or by placing it between the guitar and amp (Vox AC30, now).

On 5150, he served me a lot: with the same setting (boost + severe acute, well dug in the media), the pseudo j'éclaircicais clear sound of this brute, and the lead channel, it gave a lot more distortion modern, sharp, high-precision ... to take off the wallpaper ...

With the AC-30, the amp and my guitar with both sound bad enough, I use the GE-7 to boost the treble, and there, the sound is fabulous.

It has absolutely no coloration of sound. Properly adjusted, the volume knob allows for exactly the same level on and off, and that whatever the chosen equalization, even the most extreme, or conversely, use it as a boost or as a limiter .
Personally, I found exactly the same shades of games with and without: I attack slowly, I have a pure clean sound, I attack harder, I crunch the madness of AC30.

I've had 7 or 8 years is the pedal I use most, it is rarely turned off.
It allows you to chop his sound accurately.

Purchased from OCCAZ 'to 300F, I never find a OCCAZ' like (for Japanese and more!)

If I were stolen, the guy is hiding out interret ...
See the source
Did you find this review helpful?yesno
Cookies help us improve performance, enhance user experience and deliver our services. By using our services, you agree to our use of cookies. Find out more.