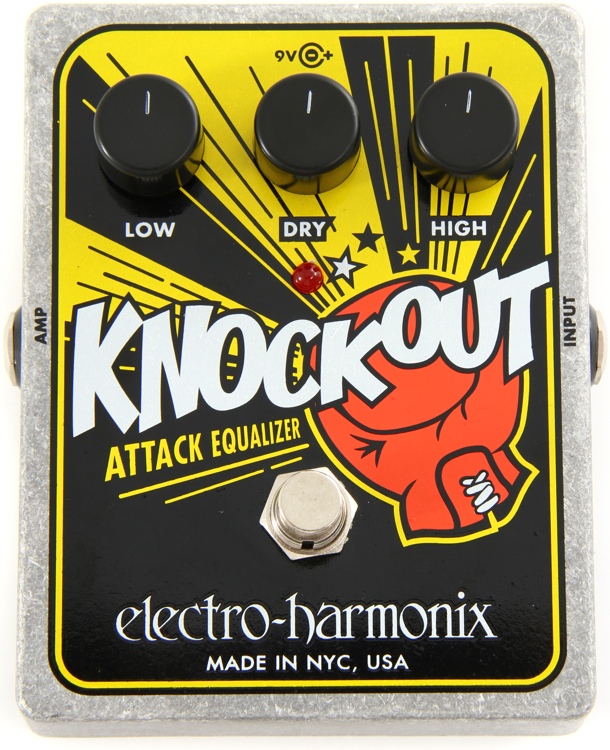 View other reviews for this product:
MountAnDewMe

Publié le 01/16/13 à 08:10
This is indeed one the odder effects in my bag. It is considered to be an equalizer filter pedal. It uses analog high and low filters to combine the newly tailored sound with the original one. While it is called an attack equalizer it certainly effects the entire sound. It utilizes three control knobs, low, dry, and high to set the two filters and mix the wet and dry signals. There is a quarter inch input jack and a quarter inch output jack and can be powered from a nine volt battery or an AC adapter.

In my opinion the manual included is useful and deceptive at the same time. Since EH bills this as an attack equalizer that will fatten a strat like a paul or thin a paul like a strat it leaves a lot to be desired. The unit is very easy to use and can either be placed in your effects chain the same as an equalizer or in the effects loop of the amp. The unit seems to do very little in front of an amp however in the effects loop it has an insane amout of shaping power. Simply set the low and high filters and blend with your original signal.

I prefer to use this in the effects loop with a guitar. It can be used with a bass however but I rarely find myself using it with bass. As I stated it seems to have little effect on the signal when used in front of the amp. It is a true bypass pedal so it will not color your sound when it is disengaged. When it is in the effects loop however this becomes a beast. It can be used to add a high end edge, add low end punch, or my favorite add both high and low and blend out a good amount of the dry signal. By nature it seems to have a scooped mid and can act like a contour control on roids. It can add a metal edge to an amp that usually does not generate tones in that vibe. Although it does sound there is something inorganic about it and it seems to become apparant after time.

There really are not many pedals to compair this to and it is a neat novelty to own. It is fun but it always finds its way out of service. Maybe if I had less gear options in the amp and guitar departments it would see more service but I always seem to have fun with it untill i decide my tone is better without it in general. It is not a costly pedal but it also sees limited action so value is a wash and I belive it sticks around more as a novelty then anything else. I think it would have been a better unit if maybe the filters were frequency assignable but meh it was inexpensive so what did I expect. It is well built but if something would happen to it I do not believe I would be desiring a replacement.
00