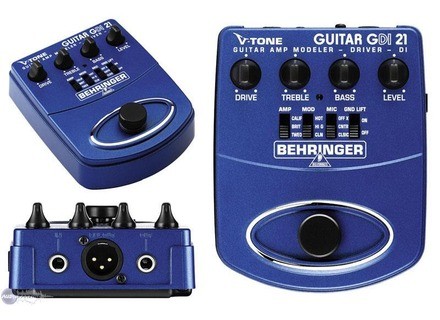 «  Keep your money for something else »
1

Buy this productView price information >
View other reviews for this product:
The PDAL is a Sino-Teutonic CLNE the Tech21 SansAmp. German design, made in China.
And lucky, as I have a genuine SansAmp GT2, I was easily able to compare guitar amp and sound card PC equal.
No need to procrastinate, the GDI 21 pales in comparison with the MODEL.
The Behringer has for her and one XLR ground lift switch as well. Normal output jack, I felt no diffrence so I guess the Gnd Lift is a power supply for the XLR fantme.
Plastic knobs and low end. Internal power supply crap, like most Behringer.

In use, well, it's like his counterpart at Tech21. In fact, I recommend the doc Tlcharger dernire this because it is more complte the examples of sounds than Behringer.
I am not an anti-Behringer but we reconnatre than a dozen pedals of this brand I had (all sold since), I had problem with the quality of 3 / 4 of them is to be dballage in the weeks following their purchase: that spit knobs, switch to lche especially big problem of buzz and breath with a power supply, or even a Maxon Powerplant premium. The power supplies are really bad for Behringer and trs often a problem of mass which makes them unusable.
For comparison, I use more than Maxon branches under the same conditions, and it has great value: high quality sound and no breath.

Having also a Bassman possd two pedals that are supposed to formulate, I can say that none of it well simulates this amp. Even if the grain and tone are not COPIS prs, is the legalization diffrent and warmth of his no.
To speak of the Behringer SPECIFICATIONS from the Tech21, trs is simple: until 1 / 4 of the drive, it is virtually the same.
Between 1 / 4 and 1 / 2, the Tech21 is doing much better in terms of saturation and clarity of sound.
APRS 1 / 2, I do not know, the Behringer breath so as to be unworkable in any fawn.
I prcise I play on Kinman Noiseless Blues pickups, microphones plutt premium and my Start makes no noise part of the channel of an amplifier drive lamps or elsewhere on the SansAmp ...

Keep your dough and buy a real pedals. Your neighbors, your ears and your guitar will thank you. I lost 25 euros, so be it.
Less comprehensive and more expensive, I would advise the AMT Tweed Sound for the Bassman and the Marshall for the M1, or R1 for Mesa. The at least, almost sounds like a real, better than the Tech21 Blonde / British / California and Boss FBM-1 and ST-2 equivalents in any case.
See the source
Did you find this review helpful?yesno
Cookies help us improve performance, enhance user experience and deliver our services. By using our services, you agree to our use of cookies. Find out more.