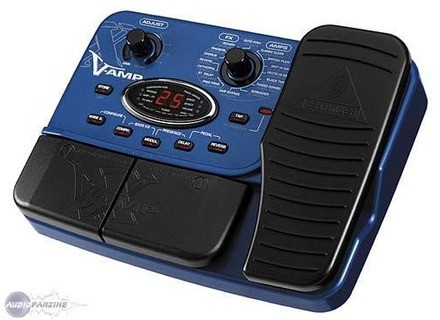 View other reviews for this product:
So it&#39;s a simulator amps and effects, with:

* 16 amp simulations, with the speakers that come with a bypass and not true at all (if the pedal is disconnected, it makes no sound) but do not too much of its food.
* Effects of everywhere: delay, wah wah, auto wah, chorus, flanger, reverb, noise gate, compressor ... And most of them, the choice between 4 different pedals!
* A freely assignable expression pedal for most effects, or for use as wah.
* A rudimentary equalizer for bass and treble.
* 100 (one hundred!) Memory locations, each with a corresponding preset factory (a little rotten in general)
* Two separate stereo output jacks on the output used as a PA / headphones and one for an external amplifier
* A good chromatic tuner adjustable
* A food (good!)

This is of course all digital, no connection noon (it is not that), the presets are freely editable, but not via a computer, unfortunately.

I can not imagine a fact we can not do with this machine. There really is everything!

* It may take some time to dip the operation of the device, and be sure to read the user manual if you get lost in all functions. For reasons of economy, no doubt there are not many buttons, so a lot of fontions need to use 2 or 3 at a time and it&#39;s a bit complicated, and also a little boring (no way to do with one hand).

* BUT once you understand everything, it becomes very easy to edit sounds. The user is completely free of what he does: we choose an amp, add effects ... It quickly becomes a game and it&#39;s pretty funny. And thanks to the 100 memory locations, it is not obliged to do all the time.

* The manual is very clear and detailed, and the more explicitly states the names of the amps and effects simulated, which is handy (especially if you love one so much that you decide to go to the original version!). The only annoying is that the reader familiar terms as if he had six years, I personally can not bear, especially since this is not a product for children ... But good are worse in life.

* The biggest problem (for some), the X-Vamp mutes for about half a second when switching from one memory to another, which may not do while playing. However, if like me you like to take a sound and keep it throughout the piece, it&#39;s not annoying at all.

* The expression pedal, finally, is pretty bad. It is far too small for my 46, not very accurate and seems fragile. For the wah sucks, especially since it not sound great, except it&#39;s clear or acceptable. As against the pedal is assignable to any parameter of any effect, and that&#39;s great, it can effect very funny.

* I use my X-Vamp of a Park amp 30 watts with a Epiphone Special (good entry level) and Aslin Dane "The Jazz" (very good half body type ES 335). In general, the sound is better with the first, the X-Vamp parsque tends to "erase" the particular sound of a guitar. So with a scratched entry-typed it or not too great, but with half a body is such a shame. However it is mainly the amp simus who do that, so if you bypass you can still use the X-VAMP as a multi-effects.

* I do not know much about the realism of the effects and amps, parsque I never tried the original ... But in general it sounds good, sound is rarely electronics. The main problem simus amp is that they are quite "settled" saturation level: difficult to get a crunch sound worthy of the name. No luck, it&#39;s the sound I like ... But if you like the (relatively) large saturation, the yen has something for everyone: Metal, Grunge, Rock ... The amplifiers are well-typed means very well the difference between them. Of course, most of us use only a small part, but it&#39;s still nice to have also the other for a little fun ... Last thing, equalization is rudimentary, complex to use and not very subtle, but are all on our one amp ...

* I divide the effects of X-Vamp in three categories: very good (chorus, flanger, rotary, reverb, delay, noise gate), the really rotten (auto wah, that sounds very electronic, acoustic simulator that sounds not at all as an acoustic) and those that I find ugly, but whether it parsqu&#39;ils are poorly simulated or parsque effect in itself does not please me (pitch bend, whammy). For those there will have to see for yourself. On the other hand, the sound tends to become a little-mail if you overlay a lot of effects, but it seems inevitable ... I&#39;m also not sure it would not do the same with analog pedals. Finally, all effects have an amplitude setting sufficient, "barely audible" to "super forward". And with all possible combinations of different sounds that can be obtained is almost endless ...

I use the X-Vamp last few months, and without exaggerating it quite changed my view of the instrument. I play long enough, but I had never studied the effects, because the price where the pedals is not easy to pay them just to experiment ... It allowed me to familiarize myself with lots of different sounds, and also good fun! Another advantage is that by plugging it into a sound system or even a stereo system, he can play anywhere without lugging his amp, which is very convenient. I also think it&#39;s a good recording tool, it helps to have a real guitar sound even plugged into the sound card.

The radius of the drawbacks, as I said the saturations are too decided for me, and the latency between two regia, even if partially circumvented, may be a hindrance to creativity. And then some effects are zero, but not much, and then you can not have everything ... Especially since the value is very good, especially in time.

I&#39;ll replace it shortly by a Vox amp lamps / modeling and some pedals, but I do not regret this purchase at all, because I had so much fun with it, and it allowed me to specify the sound I wanted to have, which is not at all clear otherwise. I wonder if I&#39;m not going to keep it handy for some effects ...
See the source
Did you find this review helpful?yesno
Cookies help us improve performance, enhance user experience and deliver our services. By using our services, you agree to our use of cookies. Find out more.