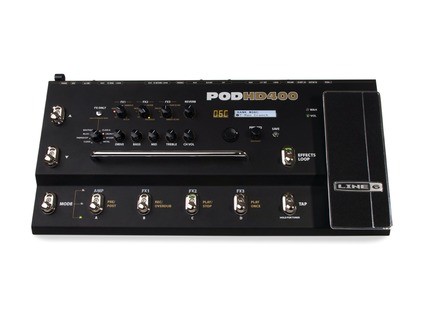 View other reviews for this product:
The HD400 is the middle of the line of the POD HD line. You can tell it is right in the middle of the line feature wise. It has a small screen like the 300 but more buttons like the 500. It is slightly more useable but with the same small screen it is still hard to make your own patches on the unit. The HD line is Line 6's new version of amp modeling. Instead of putting 80 or so models on an amp they have cut it back to 16 and modeled them in much greater detail. If you connect the unit to the internet you can get a few more amp models in updates. With the HD line compared to the X3 line its quality vs quantity. You can make an X3 sound really good but it will require a lot more tweaking. Many of the amp models in the HD units sound good straight out of the box

The usability of this board is slightly better than that of the 300. The added buttons on the 400 are for the effects loop and up and down on the preset patch bay. Even with these added controls the screen is still small and it is hard to edit patches on the unit. This unit compared to the 300 is slightly easier to use in a live setting because of the up and down preset button. Apart from that the unit is pretty much the same. There is a 3 way mode switch which is unlabled. It switches between amp mode, looper mode, and preset mode. The unit has all the outputs you could want on the back with headphone jacks unequal outs stereo outs and what not.

Sound wise all these models sound pretty much the same in theory. With the 400 and 300 you may not be able to get as good a sound just because it is harder to make patches. With the difficulty in making patches you may not want to take the time to optimize your patches. All the amp models sound as good as the amp they are modeling. These models are the most popular models in the Line 6 lineup and they are modeled in super detail. I mostly use the high gain models and I am pretty disappointed that there are not many of them. If you are a blues or country player or someone who uses a lot of clean tones this amp is the perfect modeler for you. I think these kinds of amps were easier for them to model in HD so they included more of them. These sound good as well but im sure to the tone knobs they all sound like garbage.

This unit is the middle unit of the HD line. It has some of the features of the 500 but is mostly like the 300. If you are just going to do home studio stuff I would suggest getting the 300 and using the PC patch editor at all times. If you are looking for a unit to play live with but cant afford a 500 this is much better than the 300 in live situations. It is much easier to switch between patches with the 400 than the 500 but you still have difficulty editing patches on the unit due to its small screen.
Did you find this review helpful?yesno
Cookies help us improve performance, enhance user experience and deliver our services. By using our services, you agree to our use of cookies. Find out more.